House prices are often a marker of how well an economy is functioning.

Falling prices can reduce consumers’ main form of wealth, as usually, a home is a person’s most valuable asset. As a result, this can lead to lower spending and lower economic growth.

How have house prices fared since the Brexit vote? As it was predicted that the UK could fall into a recession if it decided to leave the union, house prices demonstrate how well or badly the economy is faring.

Today it was announced that house prices are stagnating after falling 0.2 percent in the three months to April – the first quarterly fall since November 2012.

According to data from Halifax bank, over the past month prices fell by 0.1 percent.

It is thought that prices are slowing down because owning property is becoming too expensive for many people. Martin Ellis, Halifax’s housing economist said:

“Signs of a decline in the pace of job creation, and the beginnings of a squeeze on households’ finances as a result of increasing inflation, may also be constraining the demand for homes.”

House prices fell for the second month in a row

UK house prices fell for the second month in a row in April according to Nationwide. Prices declined by 0.4 percent, following a 0.3 percent drop in March, the first fall since mid-2015.

This is thought to be because households are starting to feel the effect of rising inflation since last year’s Brexit growth.

“While monthly figures can be volatile, the recent softening in price growth may be a further indication that households are starting to react to the emerging squeeze on real incomes or to affordability pressures in key parts of the country.”

According to a survey carried out by Clydesdale and Yorkshire Banks, published in March, homeowners were feeling pretty confident about the UK housing market despite Brexit.

Of the 2,000 adults surveyed, over 80 percent said Brexit had no impact on their property plans.

As well, nine out of 10 people said they believe the value of their homes will either stay the same or increase over the next year, compared to five percent who predict the value will fall.

“It’s clear that Brexit has not dampened the optimism of the overwhelming majority of both homeowners and homebuyers who continue to have confidence in the market and will not be changing their plans.”

Despite the optimism, people are moving house less

UK housing transactions in the second half of 2016 had fallen by nine per cent, compared to the same period in 2015 according to HM Revenue & Customs.

Prices fell in the first quarter of 2017

Nationwide’s House Price Index reported that prices fell slightly in the first quarter of the year.

There was a 0.3 percent decrease month-on-month to March, with the average price for a home at around £207,308.

The Index also showed that home ownership is the lowest record rate it’s even been since 1985, and it now stands at 62.9 percent.

The impact can be mostly felt in London

Analysts at Hometrack, which studies the residential property market, believe the impact of Brexit is most likely to be felt in the London housing market. They predict that there could be a deceleration in house price growth, up to 13 percent in London, as a result of the Brexit vote.

The Office of National Statistics (ONS) reported this week that London is continuing to drag in terms of growth.

Though the rate of growth for the country was 5.8 percent, in London it was only at 3.7 percent, below what is being seen in regions such as the South West and Wales.

A recent poll by YouGov demonstrated that nearly 20 percent of Londoners believe their house price will fall because of the Brexit vote.

In the capital, the impact is also being felt in a fall in house prices. According to the Royal Institue of Chartered Surveyors (Rics) latest survey, prices in central London have progressively deteriorated, and the net balance is the weakest it’s been since 2009 – the worst slump since the financial crisis.

Concerns about Brexit and the UK outlook were cited as weighing on demand.

isn’t the only thing to blame for falling house prices

There are many other reasons why house prices have fallen and could fall further that aren’t to do with Brexit.

For instance in London, stamp duty rates have gone up for homes worth more than £1m, which will affect sales in areas like Kensington & Chelsea where the average house price is £1.4m.

And home ownership in the capital has been falling for years because of how expensive it is to buy property.

There has also been a massive decline in home ownership amongst young adults (aged 25-34) due to the fact high rents are eating into salaries. 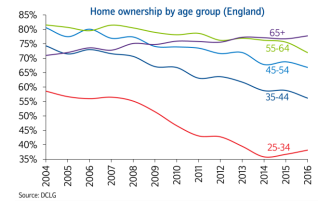 As well, the lack of available housing stock is also driving down sales.

“The latest results for our survey show little change in the underlying picture surrounding both sales and markets. High-end sale properties in central London remain under pressure, while the wider residential market continues to be underpinned by a lack of stock.

“For the time being it is hard to see any major impetus for change in the market, something also being reflected in the flat trend in transaction levels.”