Instagram — the wildly popular image-based social network owned by Facebook — has rolled out an update will notify users when they’re looking at pictures that harm animals.

The platform has taken it upon itself to regulate booming so-called wildlife selfies, which have risen on social media by 292 percent since 2014 according to animal rights lobby group World Animal Protection.

Instagram already uses such a tool for posts related to self harm, suicide and eating disorders. 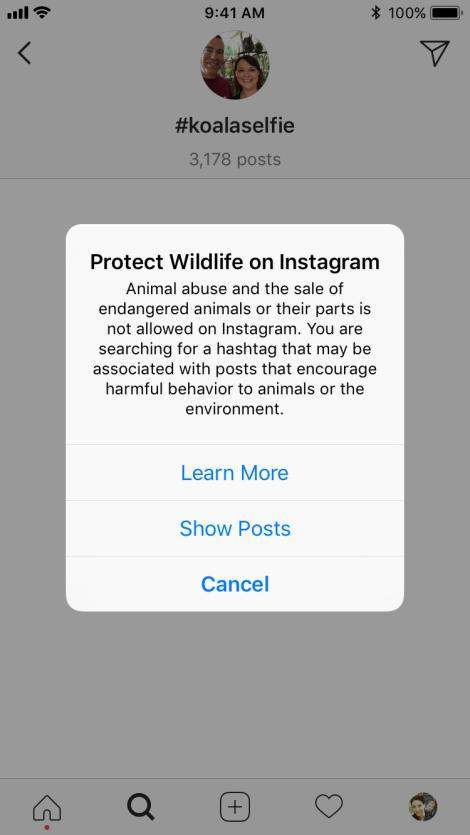 The addition of animal welfare comes after a months-long investigation by National Geographic and World Animal Protection that sought to shed light on harmful wildlife tourism in the Amazon.

The investigation discovered cases of animals being illegally captured from their natural habitats, taken from their mothers at premature ages, and kept in cages.

Instagram, which boasts over 800m users, will send users a pop-up message that reads:

You are searching for a hashtag that may be associated with posts that encourage harmful behaviour to animals or the environment.

The same process will be used against illegal trafficking of live animals or their parts, targeting hashtags such as #exoticanimalforsale.

We encourage you to be mindful of your interactions with wild animals, and consider whether an animal has been smuggled, poached or abused for the sake of tourism. Be wary when paying for photo opportunities with exotic animals, as these photos and videos may put endangered animals at risk.

A list of hashtags to be connected to the message was developed by Instagram over several months, working in collaboration with the WWF, TRAFFIC and World Animal Protection.

“If someone’s behaviour is interrupted, hopefully they’ll think, Maybe there’s something more here” said Cassandra Koenen, head of wildlife campaigns at World Animal Protection, “or maybe I shouldn’t automatically like something or forward something… if Instagram is saying to me there’s a problem with this photo.”

The initiative is intended to raise awareness of animals kept for tourism.

The process is limited however, as the message will not appear to those posting the photo.

Instagram will not reveal which hashtags will trigger the pop-up message as they say they want people to stumble across them naturally, and want to prevent people from finding ways around the process.

The alert initiative has been described as “phase one” – though further steps to prevent harm to animal welfare have not yet been revealed.