Despite the high capital barriers, quantum start-ups, such as IonQ and Rigetti Computing, have taken on Big Tech and emerged as exciting innovators. Quantum cloud services continue to provide the key for start-ups to secure investment from venture capitalists and tech firms alike. Quantum computing is a competitive industry. Google, Microsoft, Amazon, and Alibaba are all pouring in investment, and so too are the likes of IBM and Honeywell.

Currently, apart from the sale of small prototypes, the main business of quantum computing lies in the growth of cloud-based quantum services, where hardware is made accessible via the cloud. This enables companies in industries such as finance, pharmaceuticals, and cybersecurity to experiment with quantum algorithms and start to benefit from the new computing power.

IonQ and Rigetti are both principally quantum hardware companies but are also heavily involved in quantum cloud services. IonQ’s processor technology is being deployed by Amazon on AWS’s Braket quantum service, and is also used by Microsoft’s Azure Quantum cloud service. This will provide a reliable revenue stream and is a crucial aspect of their plans to attract investors.

IonQ and Rigetti are active across the quantum computing value chain

In addition to cloud services, IonQ and Rigetti are active across the quantum computing value chain. This includes quantum infrastructure, hardware, software, applications, and services. For example, Rigetti makes microwave equipment, which is vital to control qubits. It is also strong in quantum processing languages and in applications such as combinatorial optimization, which involves minimizing functions that depend on a large number of variables. This increases Rigetti’s self-reliance and makes it a far more attractive investment option, as it has a number of cards to play. If quantum computing doesn’t develop as hoped, Rigetti will still have gained experience in other technologies, and be able to continue contributing to significant advances in areas such as drug development and solving optimization problems.

Big Tech has an inherent advantage compared to smaller players due to available data, money, and an ability to sweep up talent. Consequently, Big Tech is consolidating control of many technologies, such as AI. The same could be true of quantum computing – patent publications demonstrate the scale of the competition. IBM, Google, and Microsoft have the lion’s share of patents, as the chart of selected companies’ patents shows. 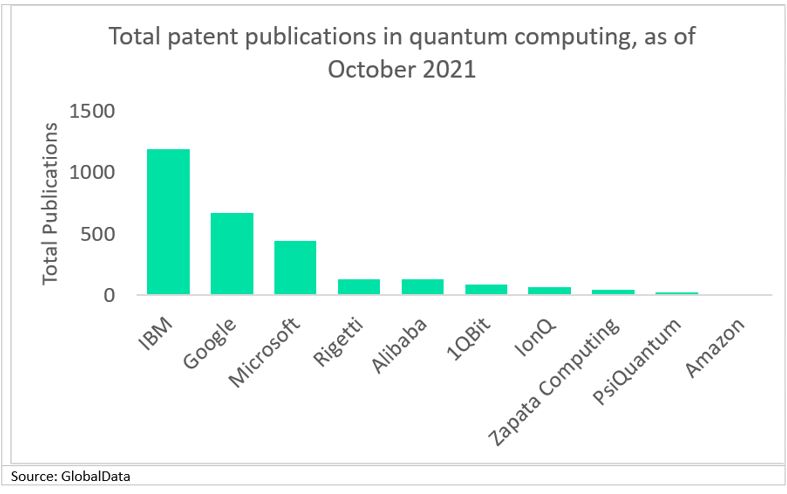 However, quantum hardware is immensely complex, with a broad range of possible qubit architectures. IonQ pioneered trapped ion qubits, while Rigetti favors superconducting qubits. It is not yet known which methods will prove to be a success, if any, and as a result investors are backing different projects. For example, Microsoft is developing topological qubit processors but has strategic investments in IonQ and PsiQuantum.

These possibilities open up the field to start-ups, enabling them to make advances across the quantum computing technology stack.

Quantum cloud services will be one of the first major benefits of quantum computers and provide the industry with a tangible use case that can be realized in the relatively short term. Accessing noisy intermediate-scale quantum (NISQ) devices via the cloud will allow companies such as Goldman Sachs and Astra Zeneca to gain a real quantum edge. As a result, investors value companies making their services accessible through the cloud. Rigetti is backed by (among others) Andreessen Horowitz and Bloomberg Beta, and IonQ by Amazon and Hewlett Packard Pathfinder. Both have now opted to go public via mergers with special purpose acquisition companies (SPACs).

Another company, PsiQuantum is spearheading photonic qubits and is backed by Microsoft Ventures, while Zapata Computing aims to optimize quantum hardware and is already integrated with IBM and AWS’s Braket. 1QBit builds software for noisy intermediate-scale quantum (NISQ) devices and collaborates with Microsoft and IBM. All three have the potential to expand their quantum cloud services offering across Amazon Web Services, Microsoft Azure, and IBM Q. This would place them in a strong position for future funding opportunities.