A national voucher program and investment in the fiber network will lead the number of Italy’s fixed broadband lines to increase from 18.1 million in 2020 to 19.3 million in 2025.

As restrictions were put into place in Italy due to Covid-19, it became apparent that a “digital divide” existed where not all Italians were suitably connected to the Internet to work, learn, and communicate from home. In 2020, 30% of the population and 57% of households had fixed broadband.

In August 2020, the European Commission approved €200 million (US$220.3 million) for an Italian voucher program supporting access to higher-speed Internet for low-income households. The program provides vouchers worth €500.00 (US$550.69) to low-income households to go towards installing broadband with at least 30Mbps download speeds and purchasing equipment such as laptops and tablets. 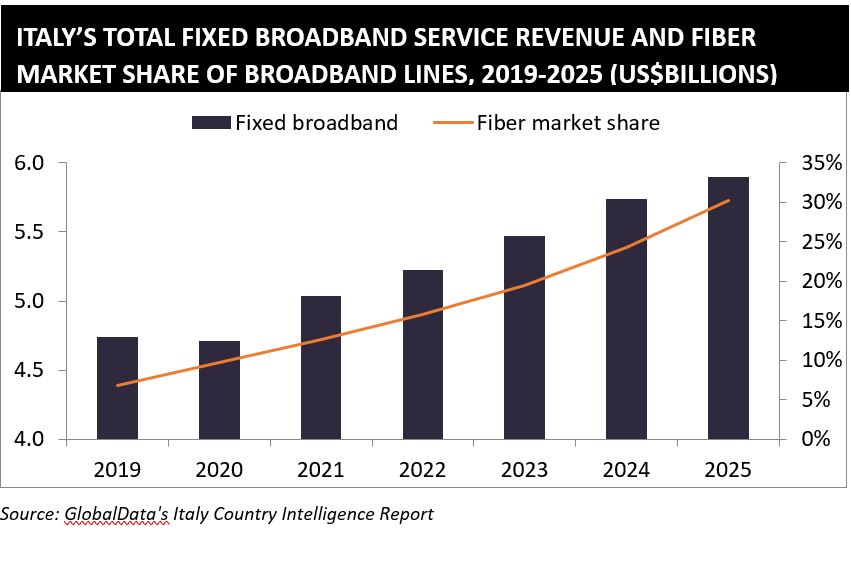 The Italian government has also supported the expansion of the fiber-optic network. For example, the state-backed wholesale provider Open Fiber plans to invest a sum of €3.8bn (US$4.2bn) for the expansion of FTTH coverage in 271 towns by 2023. Additionally, the European Commission approved the Italian government’s plans to boost high-speed fiber broadband connectivity at schools nationwide in January 2021.

The project involves deploying fiber-optic equipment to connect a total of 12,000 schools with speeds of up to 1Gbps by 2025. The Italian broadband scheme will receive around €325 million (US$358 million) of public funds, which will benefit schools in underserved areas.

The government’s support for fiber strongly contributes to fiber lines’ robust CAGR of 27.3% over 2020-2025. In 2020, fiber accounted for 9.7% of fixed broadband lines but will increase to 30.3% in 2025. The expansion of the fiber network will lead to the increased adoption of higher-ARPU fiber plans, thus, driving total fixed broadband revenue to increase to US$5.9 billion by 2025.