Fixed broadband adoption in Kenya is relatively low, with a 0.54% penetration of the population, despite efforts under the 2013-2017 national broadband strategy. Broadband has not reached most parts of rural Kenya and last-mile connectivity remains a challenge.

To solve its broadband challenges, Kenya’s government decided to adopt a new national broadband strategy 2018-2023 with revised, more realistic, broadband targets to be implemented by 2023. The strategy defines broadband as “connectivity that delivers interactive, secure, quality and affordable services at a minimum speed of 2Mbps to every user in Kenya”.

Its goal is to extend 3Mbps broadband access to 90% of the population and 10Mbps to 100% of schools, healthcare and government facilities by 2022. The strategy also sets out further goals for 2030, to achieve speeds of 10Mbps and 100Mbps, covering 100% and 80% of the population, respectively.

Ensuring the availability of telecom services to underserved and rural areas falls in line with the national broadband strategy and is supported by the Universal Service Fund (USF). The USF was established to complement private sector initiatives towards meeting universal (mobile and fixed) access objectives by expanding coverage to underserved areas.

The USF is managed by the Communications Authority and financed mainly by mandatory contributions from licensed operators providing communications services in Kenya, with provisions for complementary financing from other sources.

In January 2019, Safaricom and Telkom Kenya obtained subsidies of KES888 million (US$8.5 million) and KES350 million (US$3.3 million), respectively, under the USF. The goal of the subsidised investments is to extend network connectivity to 78 remote locations across Turkana, Wajir, Garissa, and Kwale counties.

Moreover, the Communications Authority envisages investment of around KES10.4 billion (US$99.8 million) over 2021-2022 to close the rural voice and broadband gap.

The funding from USF is supporting the operators’ network development initiatives. For instance, Safaricom is planning investments of US$348 million for setting up 2,030 new LTE and LTE-A base stations across all major towns by March 2020, while Telkom is rolling out investments of around US$9.8 million to optimise its 3G and 4G networks coverage and capacity. 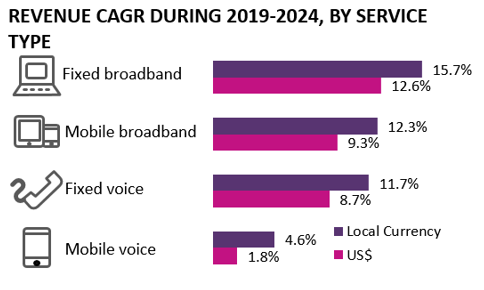