Banksy artwork has a habit of seemingly appearing out of thin air.

Paintings worth millions of dollars turn up in the middle of the night, leaving us none the wiser as to who is behind the street art that has been popping up since the 1990s.

In the usual Banksy fashion, a piece by the controversial artist has turned up over a decade after it was painted.

The Snorting Copper first appeared on the side of a public toilet on Curtain Road in Shoreditch, London back in 2005.

The stencilled image showed a police officer on his hands and knees snorting a line of cocaine. The painting was accompanied by a line of white spray paint on the floor which trailed around the surrounding streets.

As is often the case with Banksy pieces, Hackney Council decided to remove the graffiti.

As a result, the piece was spray-jetted, painted over, boarded up and consigned to the list of lost Banksy pieces.

However, the artwork has since been rediscovered. 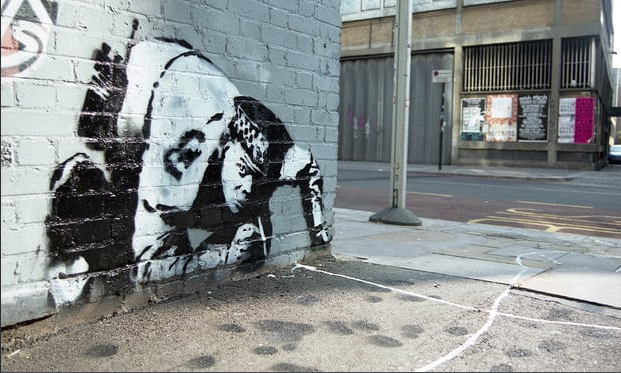 Property developers Jonathan Ellis and David Kyte recently purchased the site. They hoped to turn the disused toilet and adjacent building into homes and offices.

They had heard about the Banksy, but assumed that it had been removed.

However, after pulling off the plywood boards, they found the painting largely intact. Still visible, it had been covered by a layer of white paint.

The duo has since had the wall removed and sent off to the Fine Art Restoration Company in Carlisle, Cumbria to be restored.

The company will remove the white paint and surrounding graffiti before returning it to Ellis and Kyte.

The Snorting Copper piece has been given a £1.25 million price tag by insurers and the pair has received numerous offers to sell the piece. However, they have no intention of letting it go.

We’ve had offers to sell it. But we want to put it back. We think that’s the right thing to do for the public to enjoy it.

They intend to display the piece in its original location. However, it will be bolted down, protected by reinforced glass, CCTV and alarms to ensure that it doesn’t come to harm again.

A public unveiling is set to take place on 5 October.