“We came here for the friends,” says Facebook’s apologetic TV commercial, part of the social network’s PR campaign to undo the damage caused by ‘fake news’ and data misuse. But algorithms speak louder than words, and in early 2018 Mark Zuckerberg announced a raft of changes that reshaped the news feed to show more posts by friends and family. The algorithm worked as intended. But in the process, social media marketing became collateral damage.

The new algorithm, favouring posts, likes and comments made by friends, has made it increasingly difficult for businesses to be noticed in a pool of content that, for the average user, can be as high as 2,000 posts a day.

According to marketing and public relations agency Oglivy & Mather, organic news feed posts reach just 2% of brand audiences. Out of that 2%, just 10% are reading.

One way to avoid the algorithms is by paying for Facebook ads, which can be very costly – particularly for smaller businesses.

Another is to contact customers directly through Facebook Messenger, something that Dutch startup I AM POP is now offering as a service in the form of POP.

How does it avoid Facebook’s crowded news feed?

Businesses can connect the subscription-based service to their Facebook page and then, using templates, directly contact users following the brand. Users can then click on pre-set replies to find out more, in what the company calls “flows”.

“Messaging is one-on-one so it solves many of the problems social media news feeds face such as competing for content, overcrowding, and filtering,” I AM POP’s founder Tim Heineke told Verdict.

“But for consistent results, the technology needs to be a simple day-to-day utility, not a one-off campaign tool which is complicated to use.”

In some ways, the service works similarly to direct marketing emails. But where marketing emails are static, POP’s software can be programmed to deliver automatic responses to likely questions, similar to a chatbot – although Heineke is keen to differentiate.

Instead, he calls it a “chat editor”. And, unlike a chatbot, POP does not use AI.

“Artificially generated conversations are rife with complexities and 99% of the time will fail after several sentences,” he said. “You’d be amazed how much more efficient a few simple button menus will be.”

POP’s focus is instead on interactions that are more human. That could be, for example, an artist using POP’s templates to provide a framework to create a tour diary that can be sent straight to fans via Messenger.

“If you’re an artist, AI is not going to write an engaging tour diary for you, that’s something which can only come from you, or someone very close to you,” said Heineke.

Marketing without the spam

The implementation of GDPR was widely seen as an anti-marketing directive. In the run-up to the 25th May deadline, consumers all around Europe received emails from businesses that they couldn’t remember signing up for seeking their consent to be contacted post-GDPR.

These emails shined a spotlight on spam emails and gave control back to consumers to choose the content they receive.

Separating itself from such marketing emails, I AM POP only sends messages to users that have opted in to receive updates.

“There is strictly no unsolicited messaging,” said Heineke. “What this means for a brand is that where before a social media strategy may be ‘see what sticks’ is now a targeted, relevant approach to directly engage with its audience.”

Heineke believes that this will push brands to use messaging more sparingly and more effectively. 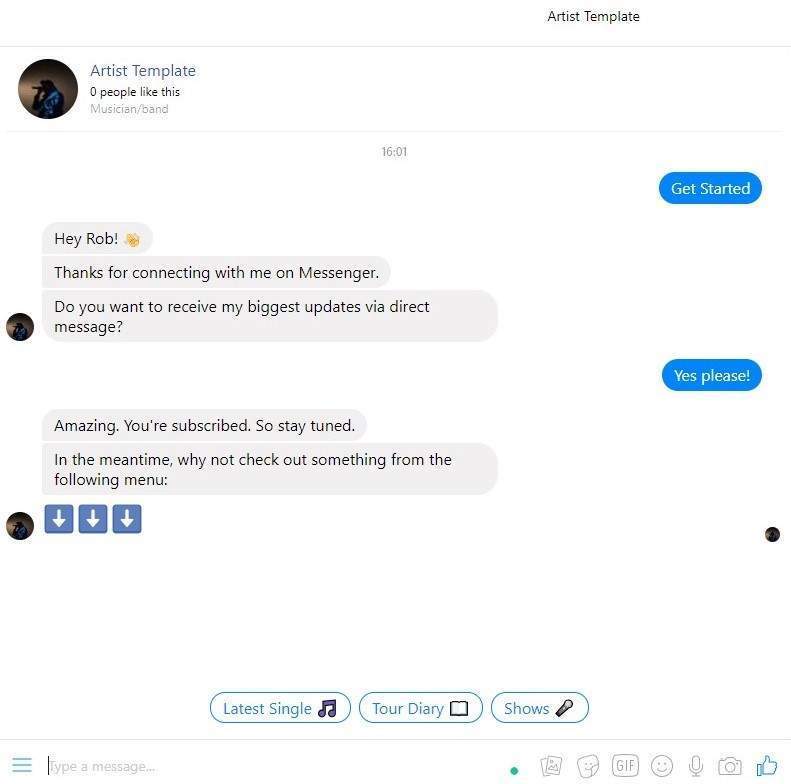 However, there are tools in place that stop brands from misusing the messenger feature, which Heineke sees as “encouraging a fair engagement conversation for all”.

Beyond Facebook, I AM POP may one day integrate its service into Whatsapp and iMessage. It could also move into other spaces, such as being used by consumers in a social context.

“Imagine you go on a holiday and you write a little chat ‘narrative’ instead of a postcard,” said Heineke.

“You add buttons, perhaps some GIFs, and send it to all your friends on Facebook – think of it as the modern-day wish you were here!”

But for now, it is focusing on circumventing the crowded news feed. Facebook has changed how it aggregates content many times since the news feed launched 12 years ago. Keeping up has been tricky for marketers, but messaging tools could prove a useful way to keep in touch and avoid Facebook’s crowded news feed.