In the past five years the way we pay has changed a lot, especially in mobile payments.

However, the payment environment around the world has developed in two very different directions.

In developed markets where traditionally the banking and payment infrastructure is well in place, consumers are not embracing mobile payments as eagerly as in developing economies where mobile payment is filling the gaps in the market.

People in China and India have a more positive attitude towards mobile payment compared to any other market, according to statistics from GlobalData.

At the same time the World Bank’s Financial Inclusion data shows that both still have substantial unbanked segments, in contrast to other markets.

The propensity to adopt mobile payments is not necessarily dependent on how technologically savvy consumers are, but rather on their need for electronic banking and payment tools.

Mobile payments in China and India presented an option to the financially underserved, where banks and cards were unable to.

Unsurprisingly, mobile payments in these countries rapidly evolved to support platforms with little network infrastructure required beyond a 3G connection. 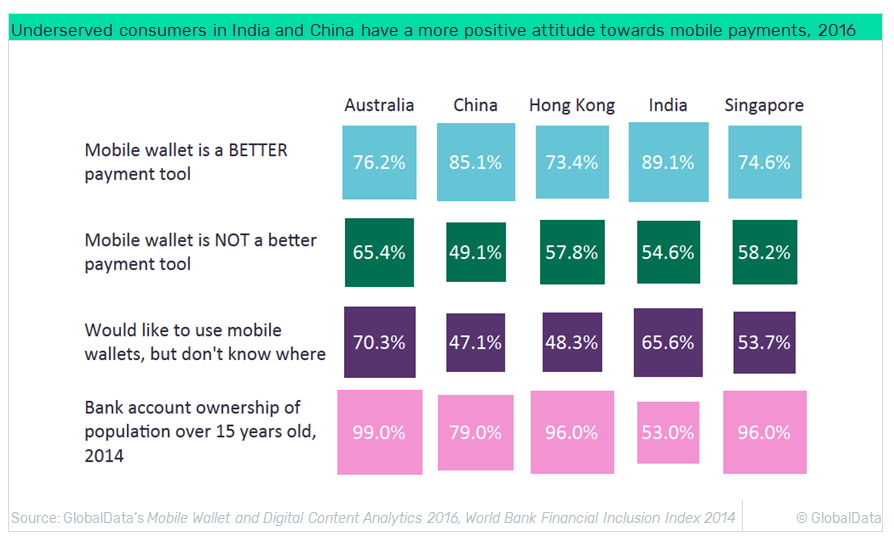 The development of a mobile payment industry leader took a very short period of time in these markets.

For example Alipay and WeChat Pay in China and Paytm in India have only evolved in the past few years, and are now poised to become the industry standard in their respective markets.

However, in markets where consumers are still used to payment by cards and are well banked, the urgency was lacking.

Various competing entities all wanted a piece of the market and so developed markets are still far from seeing mobile supplant more traditional payments, the way it is beginning to do in China and India.