For many of us, decorating our house for Christmas only really extends to hanging a wreath on the door and putting up a tree.

But for some it is an opportunity to turn buildings into winter wonderlands, bringing the North Pole to the door and draping everything in so many lights it could be seen from space.

There has been a rise this year in how much London’s wealthy spend in the attempt to get their homes Christmas-ready, the Guardian reported.

Florists can be hired for upwards of £1,500 and professional event planners have been called in, with ice rinks and live reindeer in tow.

A so-called snow window painter is being hired up and down the UK to decorate windows in fake snow, with prices ranging from £150 to over £1000.

There is even an international event to assist the development of Christmas-decoration ideas which starts in January, called Christmas world in Frankfurt.

Homes, hotels, restaurants and pubs are all competing for the most Instagram-able exterior, and Verdict has been taking a look at some of the impressive displays this Christmas season.

The daughter of Formula 1 tycoon Bernie Ecclestone, Tamara Ecclestone, has been the subject of tabloid attention as she decked out her £70m home following a Nutcracker theme, complete with toy soldiers, full-size sleigh, reindeer and gingerbread men.

Though decorations started as far back as November, Ecclestone will not actually be spending any time in England over the Christmas season to appreciate the lavish display.

Instead, she will be spending the holidays in Los Angeles.

Jeff Leatham is the artistic director of the Four Seasons in Beverly Hills and Paris, as well as a regular contributor to the Kardashian’s enviable interiors.

This year he has employed his trademark angular, sculpture-like designs to create the impressive collection of Christmas trees in the lobby of the Parisian hotel, as well as one tree made entirely from suspended light bulbs.

The resort does not hold back when it comes to Christmas decorations.

Every year it hosts the Christmas at the Princess festival which runs on beyond 31 December.

It takes an ice-skating rink, special holiday characters, Santa’s secret headquarters and over 4.5 million lights to bring this festive dream to life.

Every year the hotel gets a different designer to create their central Christmas tree, and the task fell to Karl Lagerfeld this year.

It follows a newfound trend of upside-down Christmas trees (perhaps Stranger Things has been more influential than we realised).

The centrepiece is a 16-foot tree with its crowning star seated on its silver roots.

It is adorned with lametta, handmade silver leather feathers, snowflakes and candles.

A series of similarly inverted spruce trees are dotted around the lobby. Other festive additions to the hotel include horse-drawn carriages and carol singers who greet guests. 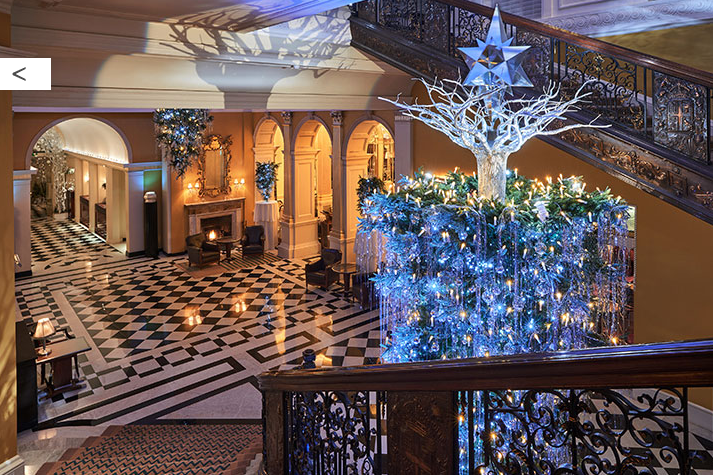 Each year the Dome treats passersby to winding lights around each of its impressive columns, mini Christmas trees in its window boxes and a giant wreath above the main doorway.

Inside is a towering Christmas tree reaching up into the height of the dome itself. No surprise, it’s become a mini-tourist attraction in itself and people often stand outside for a picture. 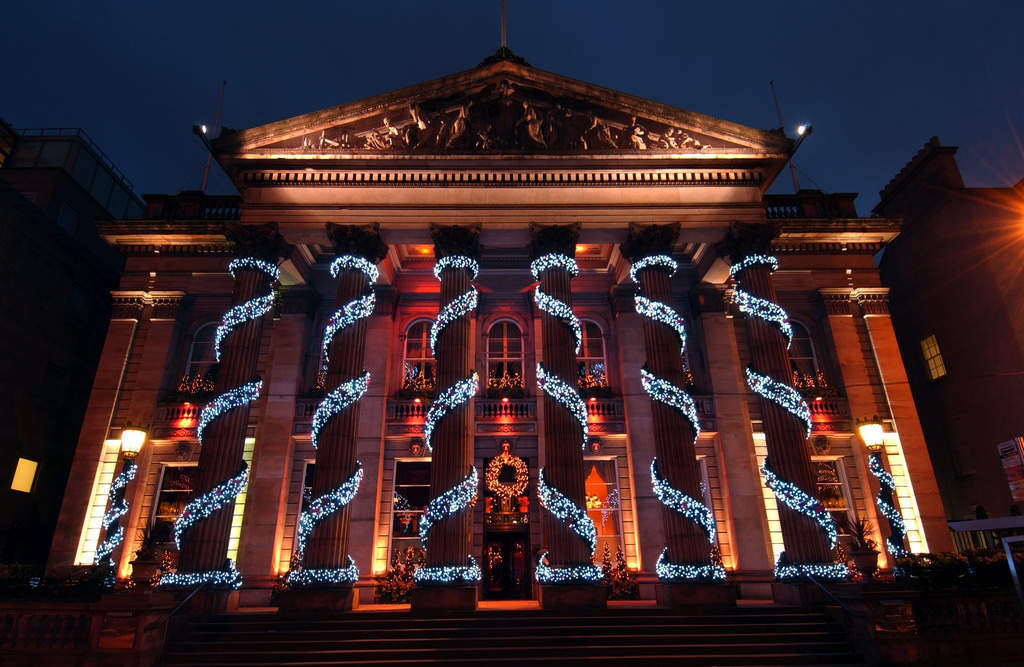 A video released on Buckingham Palace’s official social media accounts show interspersed shots of the bedecked palace with facts about holiday traditions in the UK.

Two smaller trees decorate the Grand Entrance, and all are adorned with white lights and crown-shaped baubles.

Of course, the internet couldn’t resist making some of her efforts into a meme, but it’s all in the spirit of festive fun.

This pub is already an Instagram favourite in London, and when the Christmas lights are put up it certainly is a sight to behold.

Its exterior is bedecked with 21,000 lights and 100 trees – it’s unsurprising that there’s more often than not a queue outside of people trying to get the perfect shot.