Fixed broadband service revenue will grow at a CAGR of 2.4% over 2020-2025 in the Netherlands, to reach US$3.1 billion by 2025, supported by robust growth in FTTH/B, cable subscriptions, and growing broadband ARPU, on the back of the government’s plan to expand broadband network coverage. The Netherlands’ national broadband plan, the Digital Agenda for the Netherlands, and the Dutch Digitalisation Strategy comply with the EU’s Digital Agenda for Europe (DAE), which aims to provide broadband Internet speeds of at least 30Mbps to all households by 2020 and 100Mbps to all households by 2025.

Telco VodafoneZiggo launched its own initiatives in line with the government’s aim to provide access to 1Gbps broadband to most of the population by 2023. VodafoneZiggo targets to offer speeds of up to 1Gbps to 7.2 million homes by 2021. As part of this initiative, in February 2020, the operator launched 1Gbps DOCSIS 3.1-based cable broadband services in The Hague, covering 600,000 households and businesses in Amsterdam as of October 2020.

Netherlands has no shortage of telco rivals

Rival KPN has also been investing in deployment of gigabit-capable broadband networks to offer ultra-high-speed Internet access. KPN aims to expand its FTTH/B network to connect over 1 million new households by 2021. KPN conducted trials using gigabit-capable passive optical network (PON) technology in the Amersfoort’s Vathorst district in July 2020 and achieved broadband speeds of up to 8Gbps. 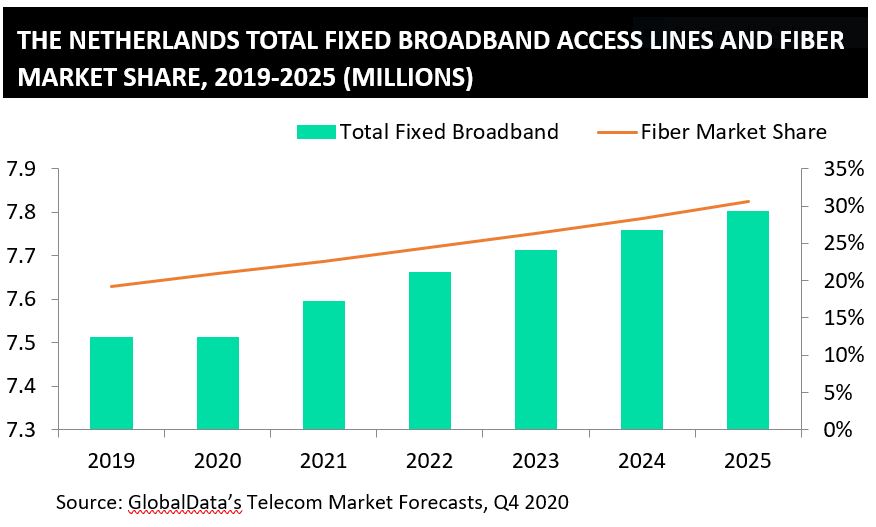 With a smaller fixed broadband market share and less aggressive coverage target, T-Mobile is expanding its FTTH/B footprint. The telco signed in 2020 a fiber deployment agreement with Pan-European investment firm Primevest Capital Partners and IT service management company VolkerWessels Telecom, which will be in charge of construction. The partnership aims to connect three Dutch cities – Centrum, Strijp, and Gestel – with FTTH/B. Under the agreement, T-Mobile will open up the network to all competitors. The telco’s target is to connect at least 100,000 households with fiber-optic broadband network by 2020.