Delivery of fifth-generation (5G) services represents the future of the mobile network, but what do operators do with all the previous wireless generations – 2G, 3G, and 4G? Each technology generation brings with it a unique set of operating challenges.  In a bid to find a working solution, operators are moving toward a common “core” network to support all the Gs.

As 5G services begin to be deployed, operators will face the challenge of managing a web of legacy 4G/LTE, 3G and even 2G radio technologies using a common core network. The focus for many operators requires a focus on the “three Cs”, this is cloud, connectivity and computing.

All of these “Cs” are vital to the 5G core of course. A cloud-native architecture enables stateless operations and facilitates control/user plane separation. A 5G core platform must flexibly support multi-edge computing (MEC) and strike the right balance between placing computing power at the network edge and at the core. And – perhaps most importantly – the 5G core must support all of the other Gs, including 4G/LTE, 3G, and even 2G. (Ironically 2G support may emerge as more significant than 3G support as many operators appear likely to decommission 3G while maintaining 2G connectivity to support legacy M2M deployments).

Ultimately, 4G/LTE is and will continue to be the workhorse for most operator networks for the next five years. GlobalData estimates that 4G/LTE will grow to a majority of total wireless customers this year, and will continue to grow to nearly two-thirds of the total customer base by 2023. We expect that the 2G customer base will still be larger than the 5G base in 2023. 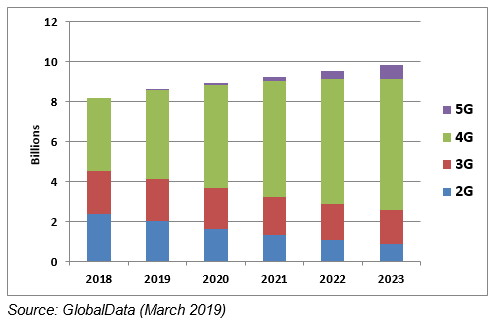 One other important feature that stands out in the 5G core is continued support for voice service – and specifically voice over LTE. Operators of all stripes are quick to point out that, despite 20 years of speculation that voice is “going to free” – customers are still willing to pay for reliable, high-quality voice services. Eventually, that will mean 5G voice (voice over NR) but considering that 5G is likely to be deployed in a much more limited fashion than LTE for most operators, VoLTE will be the primary vehicle for most operators to transition away from circuit-switched voice services.