The yearly Nobel prizes are announced this week.

Yesterday, three American physicists won the Nobel prize in physics for the first observations of gravitational waves, ripples in the fabric of spacetime that were anticipated by Albert Einstein a century ago.

On Monday, three other American scientists picked up the 2017 Nobel prize in physiology or medicine for their work on circadian rhythms.

This morning the Nobel prize in chemistry will be announced. Who will win? Probably an American — because it almost always is.

Number of Nobel laureates by country

The Sveriges Riksbank Prize in Economic Sciences in Memory of Alfred Nobel was first awarded in 1969. Since then, 78 people have won the award, and of these, 82 percent of them have been from either the US or the UK.

However, this trend is not isolated to the economics prize — it extends to all other science awards — medicine, physics, and chemistry.

The western world has dominated the awards for the entirety of its existence, with the US in first place with 367 laureates.

The UK trails behind in the distance with 125 laureates and Germany comes in third with 105. 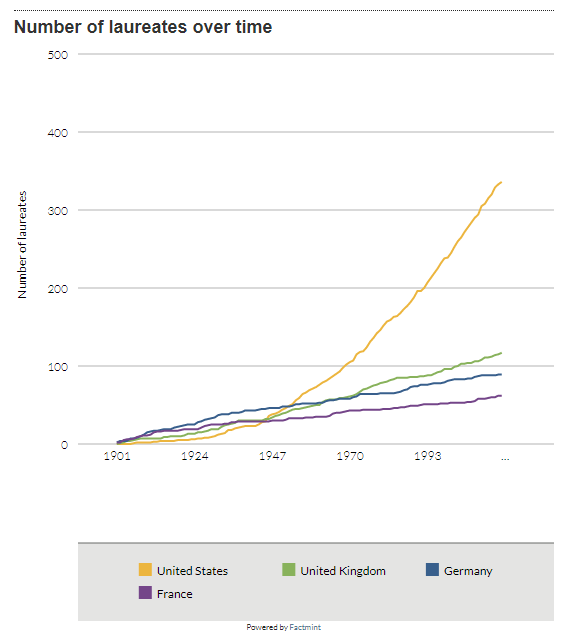 Why is the US so far ahead?

The number of Nobel prizes won by the US began to climb shortly after World War II.

According to Stuart Anderson, executive director of National Foundation for American Policy, this coincides with the passing of the Immigration and Nationality Act of 1965, which removed the county’s national origin quotas and opened the door to Asian immigrants and the later Immigration Act of 1990 which led to greater numbers of employment-based green cards.

These two movements made it significantly easier for the US to bring in talented, intelligent people from all over the world.

In 2016 all six of the US Nobel laureates were immigrants.

However, this success is not a story of immigration alone.

The US has a history of awarding generous research to grants and has better access to higher education than many other countries. The US is also home to some of the world’s most top universities and they spend more than any other country on scientific research.

Many scientists come to the US because of its research friendly funding system.

Science is a global pursuit, it must allow people to come and go across different cultures from different countries. It’s not about money, it’s about people. Diversity really does enrich the process of discovery and invention.

Richard Dawkins, in 2013, tweeted that all of the world’s Muslim population had fewer Nobel prizes than Trinity College, Cambridge. The same applies to the whole of China and the whole of the female gender.

However, when sorted per capita the US drops to 15th in the global table, while the UK falls to 9th.

Topics in this article: Nobel Prize