Nokia and Huawei offered sharply contrasting mid-year financial updates recently. On 29 July, Nokia announced strong Q2 2021 results that prompted the company to raise its full-year guidance on revenue and operating margin. That was followed a week later by Huawei’s announcement that it saw a double-digit decline in H1 2021 revenue from both its carrier and consumer businesses.

Nokia’s growth was across the board; on a constant currency basis, the company posted year-to-year increases in all areas – most notably Mobile Networks, which appears to have turned a corner after several years of decline.

Nokia’s greatest performance came from its Network Infrastructure group, which comprises IP, optical, fixed, and submarine networks. In total, the group saw revenue increase by 20%, with operating profit up 145% year-to-year.

Despite the rosy outlook, Nokia did caution that there are headwinds coming in the second half of 2021 as the company works through the loss of significant market share at US network operator Verizon. The company’s revenue from enterprises – a source it has been targeting aggressively for several years – also declined unexpectedly despite continued growth in attracting new enterprise customers.

Huawei’s H1 2021 results marked the first period of significant decline in the company’s Network and Consumer units, which had previously managed to weather the storm in the wake of significant geopolitical challenges. Huawei posted small revenue increases in both units in 2020 despite seeing revenue decline in all but its domestic market. H1 2021 results show the company is now clearly feeling the pain of supply chain challenges and market exclusions. 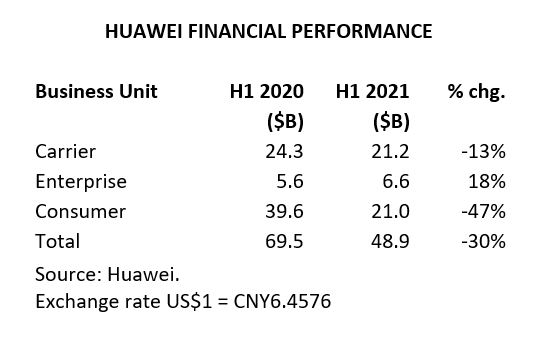 The news was not all grim for Huawei. The company did post strong growth from its Enterprise unit and remains confident that it can return to growth in its Carrier unit.

In addition, the company managed to increase its net margin slightly compared to the previous year to nearly 10%. But it is clear that the company’s five-year strategic plan will have one primary focus: according to Rotating Chairman Ken Hu in a 6 August release detailing H1 2021 performance, “Our aim is to survive and to do so sustainably.”