In the 12 months to March 2017 billionaire fortunes grew by £585bn — enough to end extreme poverty more than seven times over.

That’s according to the Oxfam Inequality Report, released ahead of the World Economic Forum in Davos this week. It found 82 percent of the all the wealth generated globally last year went into the bank accounts of the richest one percent of the population.

Something is very wrong with a global economy that allows the one percent to enjoy the lion’s share of increases in wealth while the poorest half of humanity miss out. The concentration of extreme wealth at the top is not a sign of a thriving economy but a symptom of a system that is failing the millions of hard-working people on poverty wages who make our clothes and grow our food.

The real increase in global wealth between July 2016 and June 2017 was $9.2trn, of which $7.6trn (82 percent) went to the top one percent of the population and the remainder to the rest of the top 20 percent.

Billionaire wealth rose by an average of 13 percent a year between 2006 and 2015 – six times faster than the wages of ordinary workers.

Read more: What the richest ten speakers at Davos are worth

Last year saw the biggest increase in the number of billionaires in history, one more every two days. There are now 2,043 dollar billionaires worldwide, with nine out of 10 men. 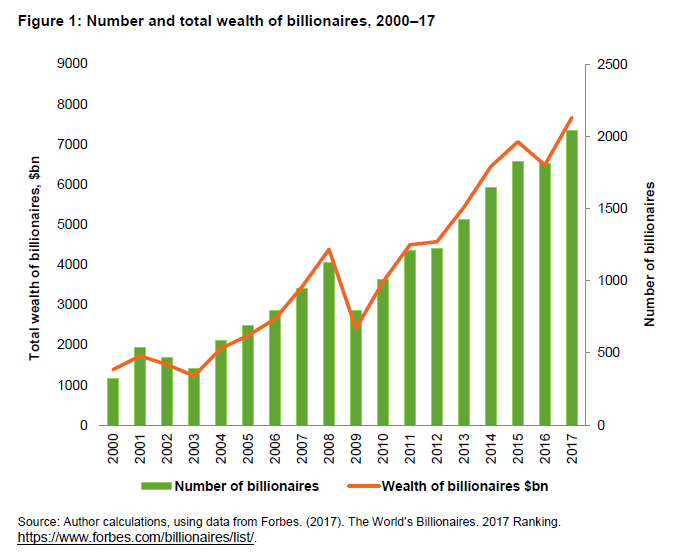 Over three-quarters of people either agree or strongly agree that the gap between rich and poor in their country is too large – this ranges from 58 percent in the Netherlands to 92 percent in Nigeria according to an Oxfam survey of over 70,000 people in 10 countries. 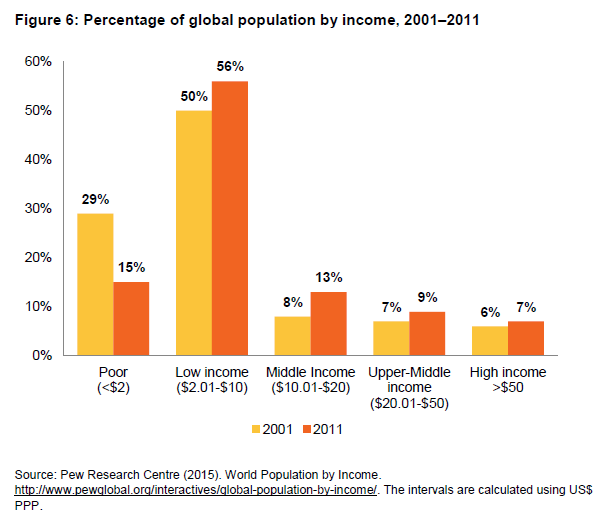 The richest verses the poorest

With wealth of $54.4bn, Carlos Slim is the sixth richest man in the world and the richest in Latin America, according to Oxfam.

His vast fortune derives from an almost complete monopoly that he was able to establish over fixed line, mobile and broadband communications services in Mexico. An OECD report in 2012 concluded that this monopolisation has had significant negative effects for consumers and for the economy.

While competition reforms in 2013 introduced fairer prices and improved service provision, the wealth Carlos Slim amassed in part because of this monopoly continues to grow, as he has diversified his investments in the Mexican economy.

Slim’s net wealth increased by $4.5bn between 2016 and 2017. This amount is enough to pay the annual salaries of 3.5m Mexican workers on the minimum wage. 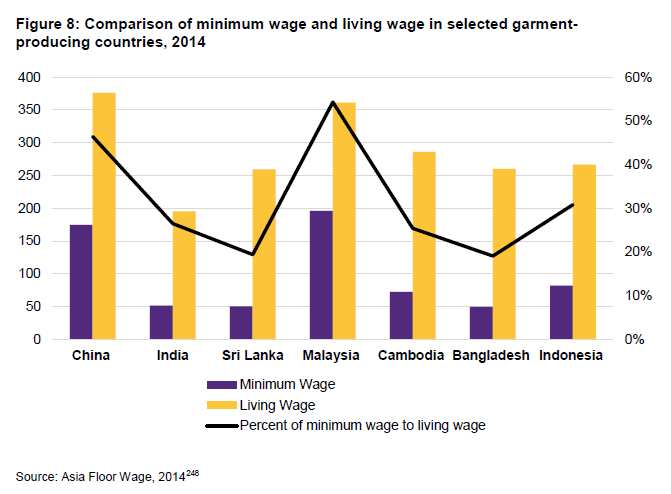 Meanwhile, around 56 percent of the global population lives on between $2 and $10 a day, with recent estimates by the International Labour Organization showing that almost one in three workers in emerging and developing countries live in poverty.

While the value of what workers produce has grown dramatically, wages have not kept pace.

The ILO has found that, in 91 of 133 rich and developing countries, wages have not kept pace with increased productivity and economic growth from 1995–2014.

Myanmar had no legal minimum wage in place, before September 2015.

Some workers were earning as little as $0.60 a day as a base wage, taking on long hours of overtime, including forced overtime.

In 2012, workers held mass strikes in protest. Following more than two years of negotiations between unions, employers and the government, a new minimum wage ($2.70 for an eight-hour work day) was announced.

When the government increased this by the end of 2015, it had the potential to increase earnings for the 300,000 workers in the garment sector by nearly $80m a year.

Multinational companies that source garments from Myanmar supported the implementation of the minimum wage, showing how they can act as a force for good.