The US states of New Hampshire and South Carolina are suing Purdue Pharma, the manufacturer of OxyContin for its role in the opioid crisis.

The New Hampshire attorney general’s office filed a civil complaint, alleging that the pharmaceutical has downplayed the drug’s risk of addiction, overstated its effectiveness, failed to report suspicious prescribers, and claimed it is nearly possible to abuse, according to the Washington Post.

The drug OxyContin, an opioid pain medication made from the opium poppy like the illegal drug heroin, is at the centre of the opioid epidemic sweeping the US.

According to the Centre for Disease Control and Prevention, nearly half of all US opioid deaths involve a prescription opioid.

Missouri has also filed suits against Purdue as well as other pharmaceutical companies that make opioid medication in the US.

As a result of the increasing number of states involved in suing Purdue, legal experts told Bloomberg that the company could face a multi-billion dollar settlement, similar to ones the tobacco industry has paid in the past.

The opioid crisis is the latest in a string of controversies that the pharmaceutical industry has faced. Here are some of the other pharmaceutical scandals that have happened in recent years.

When Martin Shkreli was a pharmaceutical chief executive back in 2015, he was branded “the most hated man in America” for hiking the price of a medication used by Aids patients.

After acquiring the rights to the medication, an anti-parasite drug named Daraprim, his firm Turing Pharmaceuticals hiked the price of the drug by 5000 percent, taking the cost from $13.50 to $750 per dose, overnight.

The 34-year-old was jailed earlier this week after being found guilty on three counts of securities fraud.

Last year, it was revealed that the pharmaceutical company Mylan had hiked the price of its patent EpiPen, the emergency allergy treatment, from $100 in 2007 to $600 in 2016.

The company’s chief executive Heather Bresch appeared before the House Committee on Oversight and Government Reform to testify.

Lawmakers told Bresch that the price increases were “sickening”, “disgusting”, and showed “blatant disrespect” for American families who could no longer afford the lifesaving devices for their children with severe allergies.

By contrast, in the UK a prescription of EpiPens cost £8.60.

The company was later hit with a class-action lawsuit over the skyrocketing price.

Earlier this year, the Greek government launched an official investigation into the Swiss pharmaceutical company Novartis over allegations of corruption and bribery.

According to reports, two executives from Novartis gave the US government documents indicated that more than 4,000 private and public doctors were bribed in order to promote Novartis products and boost prescriptions.

Novatis creates drugs related to conditions such as hypertension, cataracts, and cancer.

A Greek Novatis official, who was questioned about their role in the case, attempted suicide in a famous hotel in Athens. This led to further concerns about the company and its practices.

One of the world’s biggest drug producers, GlaxoSmithKline or GSK, was fined $490m by China after a court found it guilty of bribery, back in 2014.

Similar to the Novartis case, the company was found guilty of paying out bribes to doctors and hospitals to have their products promoted.

A few months later, GSK fired 110 of its total 7,000 employees in China due to their supposed roles in the bribery case.

At the time, GSK said it remained fully committed to China and had “implemented fundamental policy reforms to ensure the company operates to the highest standards.”

Despite Valeant reporting earnings ahead of expectations this week the Canadian-based drug maker is still nursing its wounds from an accounting scandal that saw investors wipe more than $80bn from its market value.

Valeant had been a Wall Street darling for over two years, with investors raving about how the company had revolutionised the pharma industry. 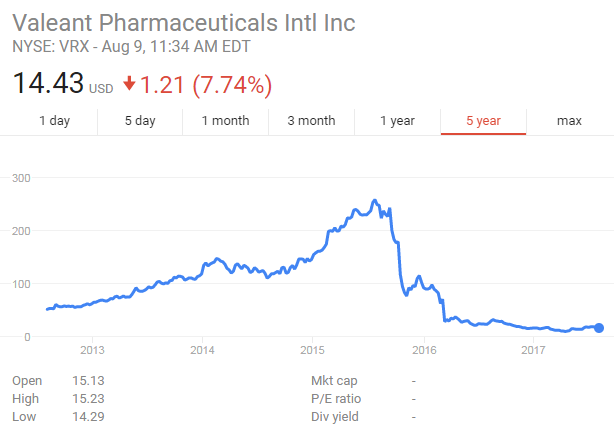 Its rapid acquisition strategy appeared to produce lots of growth, and not a lot of need to spend money on R&D, often the biggest expense for a drug market.