Around 65.6m people were forcibly displaced worldwide at the end of 2016, either as refugees, asylum seekers or internally displaced, a total bigger than the population of the UK according to a report by the UN.

The UN Refugee Agency’s (UNHCR) annual Global Trends study has found that more people have been uprooted around the world as a result of war, violence, and persecution than at any other time in its 70-year history. It is thought that 20 people driven from their homes every minute last year, or one every three seconds.

The UN’s high commissioner for refugees, Filippo Grandi, said this was an unacceptable number.

It speaks louder than ever to the need for solidarity and common purpose in preventing and resolving crises, and ensuring together that the world’s refugees, internally displaced and asylum-seekers are properly protected and cared for while solutions are pursued.

How do the UN’s figures for displaced people compare to the population of the UK*?

2. Around 40.3m were uprooted within the borders of their own countries. This is nearly five times more than the population of London (8.6m)

By any measure this is an unacceptable number. – Filippo Grandi, UN high commissioner for refugees

4. There are now 22.5m refugees, the highest figure since UNHCR was founded in 1950, which is almost under the combined population of all the UK’s city regions (26.2m)

6. Over half the Syrian population, 12m people or 65 percent, are displaced internally or living outside the country as refugees. This is more than the populations of Wales, Scotland and Northern Ireland put together (10.169m) 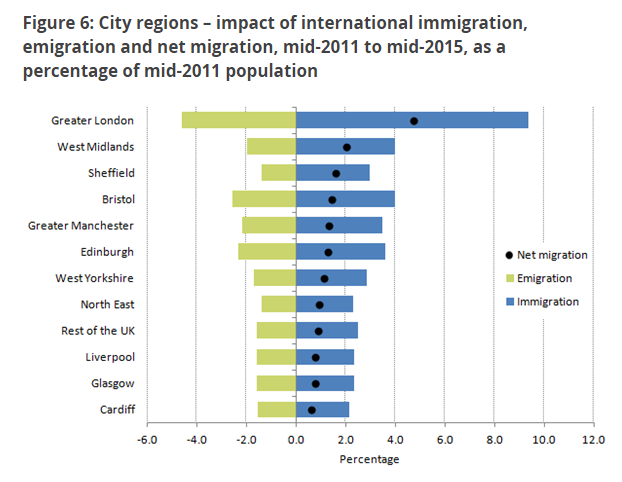 Of the biggest threats facing people across the world, the seven-year-long conflict in Syria has meant the country is now the biggest producer of refugees. In the past 24 hours, US military shot down a Syrian government fighter jet and Russia proposed the next round of peace talks to take place in Kazakhstan’s capital of Astana.

It doesn’t look like there will be an end to the conflict soon, which will lead to the numbers of displaced Syrian citizens to grow.

In addition, the escalating conflict in South Sudan over political infighting means nearly 2m people have fled the newly-independent nation. Grandi called on government officials to take more responsibility for its people.

“Now, the authorities have a greater responsibility because they are in charge of this country and it is under their leadership that we must seek security. We are here to help but, in the end, as you know, the responsibility is with you and your colleagues in Juba and here.”

What is being done to help displaced people?

According to research by the UNHCR and other agencies such as the Internal Displacement Monitoring Centre (IDMC), 40.3m people are living in internal displacement caused by conflict and violence by the end of 2016. This figure has nearly doubled since 2000 and has increased dramatically over the past five years.

“The numbers keep rising because conflict and disasters – the main triggers of forced displacement currently recorded – show no signs of abating.

The IDMC has found that the numbers of displaced peoples keep adding up, thanks to the cyclical nature of the phenomenon.

“The Democratic Republic of Congo (DRC), the country with the highest number, (922,000) of new displacements caused by conflict in 2016, is a poignant example of a country that dropped off the international agenda only to re-emerge a few years later with significant numbers of new displacements,” said Balik.

So, what can be done to prevent conflicts and disasters that are causing displacement on such a large scale?

“To reduce vulnerability and future risk, we need to invest more political and financial resources in conflict prevention, disaster risk management, peace-building and diplomacy. Also, displacement will continue to have major impacts unless the drivers of conflict, poverty, climate change and state fragility are addressed,” said Bilak.

What can I do to help?

As a result of conflicts across the globe that are forcing people to leave their home countries, UNHCR predicts that at least 10m worldwide are without a nationality or at risk of statelessness at the end of 2016.

To support UNHCR and its aims to protect and assist refugees all over the world, you can make a donation, which will go towards its worldwide field operations.