There are few auctions quite as well-known and well-regarded as RM Sotheby’s sale in Hershey, Pennsylvania. This auction delivers on the luxury cars you’d expect, while also honouring America’s proud automotive history.

This year’s Hershey auction will take place on 4-6 October. And judging by the cars on offer, it looks like it’ll be a whopper! We’ve collected all the details of the auction for your perusal, as well as some of the best lots on offer.

There’s plenty to see so let’s jump right into it.

The previews will take place on each day of the festival. On 4 October the preview begins at 4pm and ends at 10pm, with a preview BBQ between 6-8pm. On 5-6 October, previews take place between 10am and 6pm. However, if you actually want to stand a chance at owning one of the cars you’ll need to wait. The auctions themselves start at 6pm and go on until 10pm.

The general public are allowed to attend for free for all the previews. However, only bidders can stick around for the auctions. If you do plan to bid on the cars, a bidder’s fee of $200 per person will apply, whether or not you succeed in getting your hands on one. Thankfully, the fee entitles bidders to a few freebies: a ticket to the auction for themselves and a guest and an official auction catalogue.

At such a prestigious and popular event, you’d expect some pretty cool cars to be on sale. And you’d be right in that assumption! As ever, we’ve picked out some of our favourite lots from the catalogue to really rev your engines! 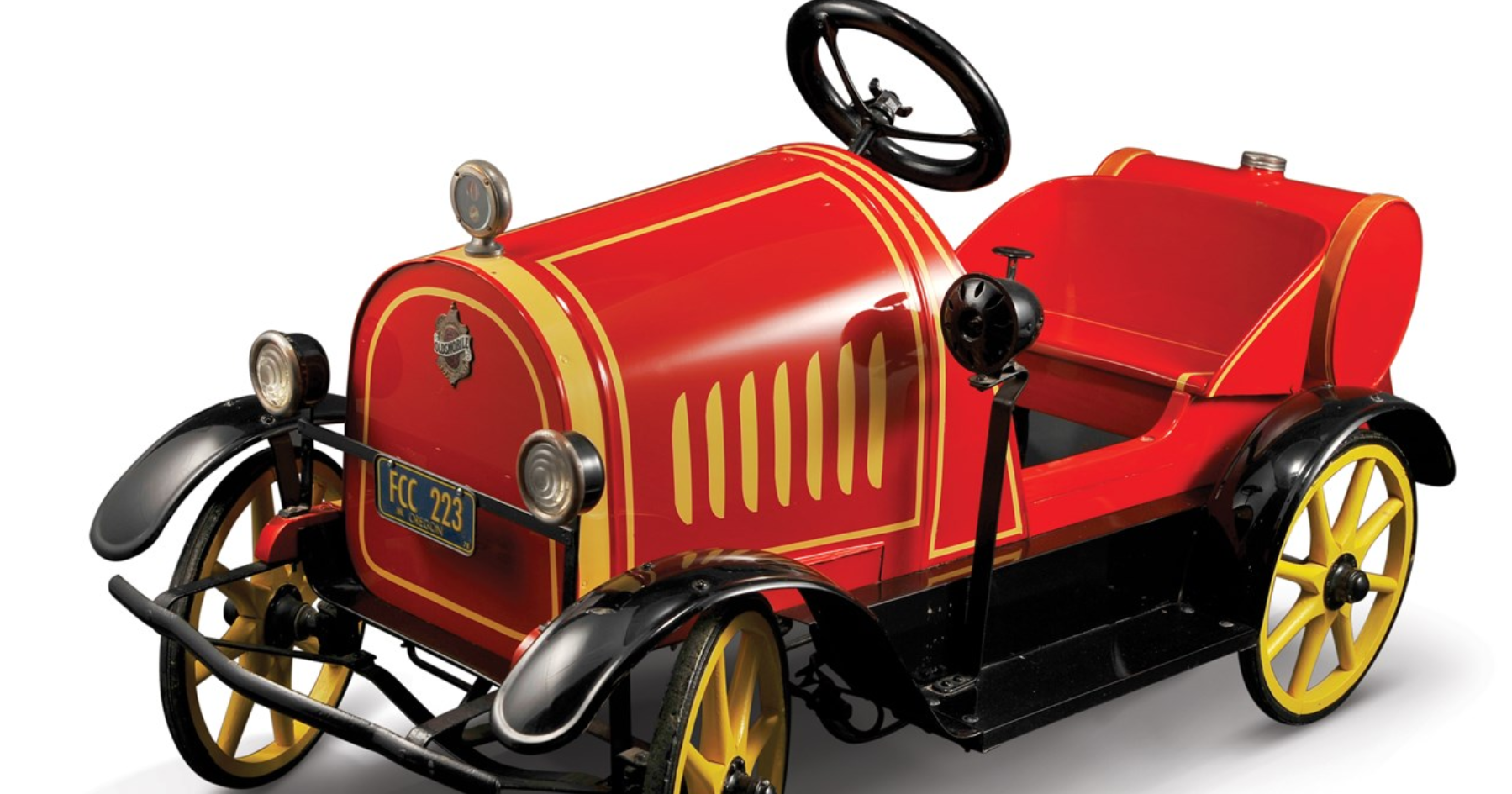 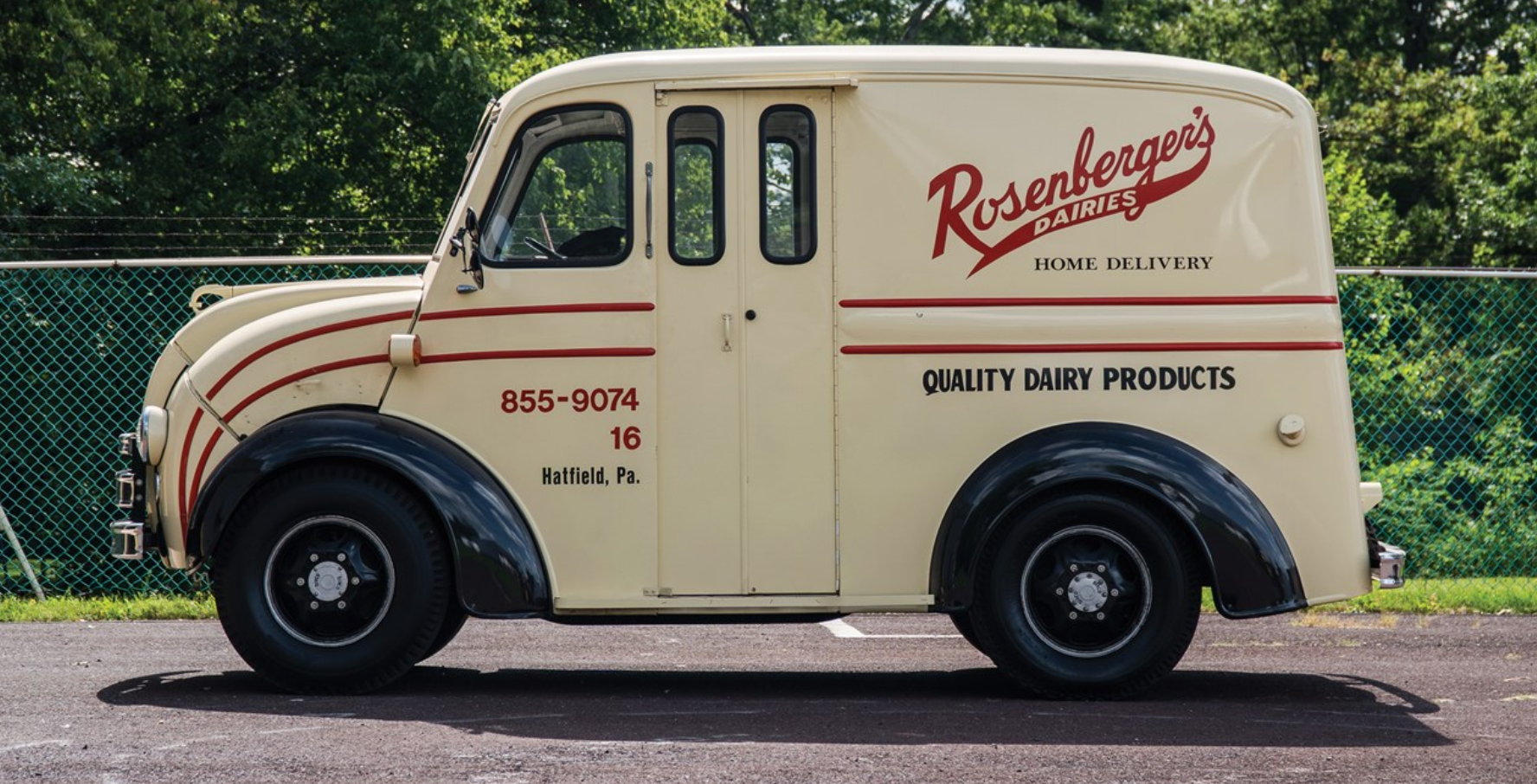 RM Sotheby’s description: An iconic Divco snub-nose delivery truck, resplendent in the cream and red livery of the Hatfield, Pennsylvania, company Rosenberger’s Dairies. It is virtually identical to pre-war models. For the first time in the company’s history annual production reached nearly 7,000 units, proving that Divco had truly conquered the dairy world.

RM Sotheby’s description: The product of the legendary Art and Color Section and its iconic leader Harley Earl, the 1941 Cadillac Series 60 Special represents the penultimate Cadillac design to hit the streets before American automobile production stopped for World War II. With a powerful 150-bhp V-8 engine mounted in a 126-in. wheelbase and featuring two different body styles, coupe and sedan, the Series 60 was among the finest mid-level luxury cars of the period.

RM Sotheby’s description: For generations, visitors to Yellowstone National Park were chauffeured along the park’s scenic roads in massive open-air buses, produced by the White Company of Cleveland, Ohio, and operated by the privately owned Yellowstone Park Transportation Company. 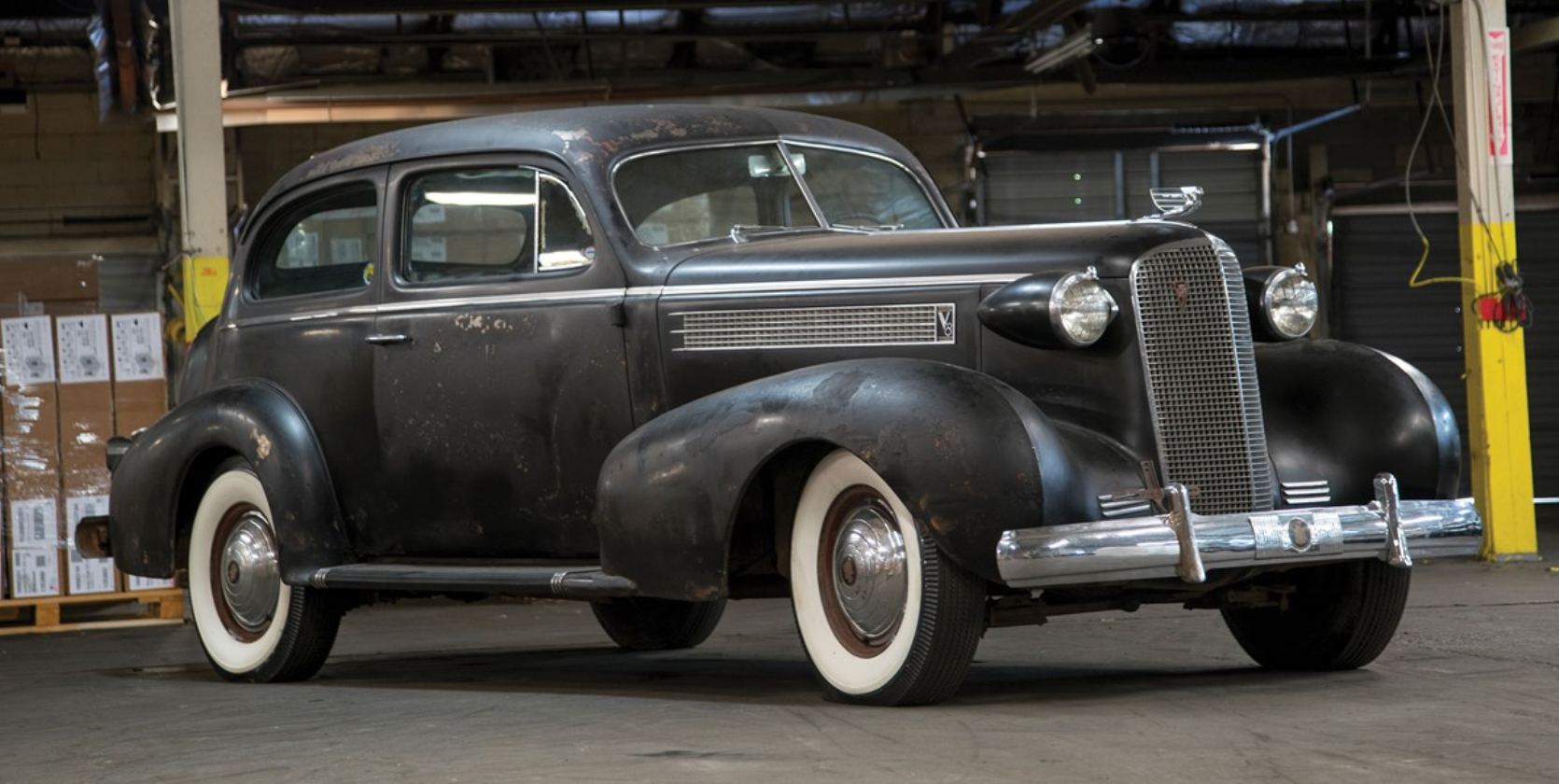 RM Sotheby’s description: Nothing bespeaks Classic Era opulence like a massive coupe, and few fit the bill better than the five-passenger touring coupe, Fleetwood style number 6011, on the 1937 Cadillac Series 60 chassis. This body was literally a two-door sedan, as Fleetwood took a sedan body, and simply cut out larger front doors and no rear doors; the interior featured a sedan’s rear seat and capacious legroom, with an armchair for the driver and a folding jump seat alongside. The intention was that the car would be chauffeur-driven, with a maid or valet accompanying the jump seat. 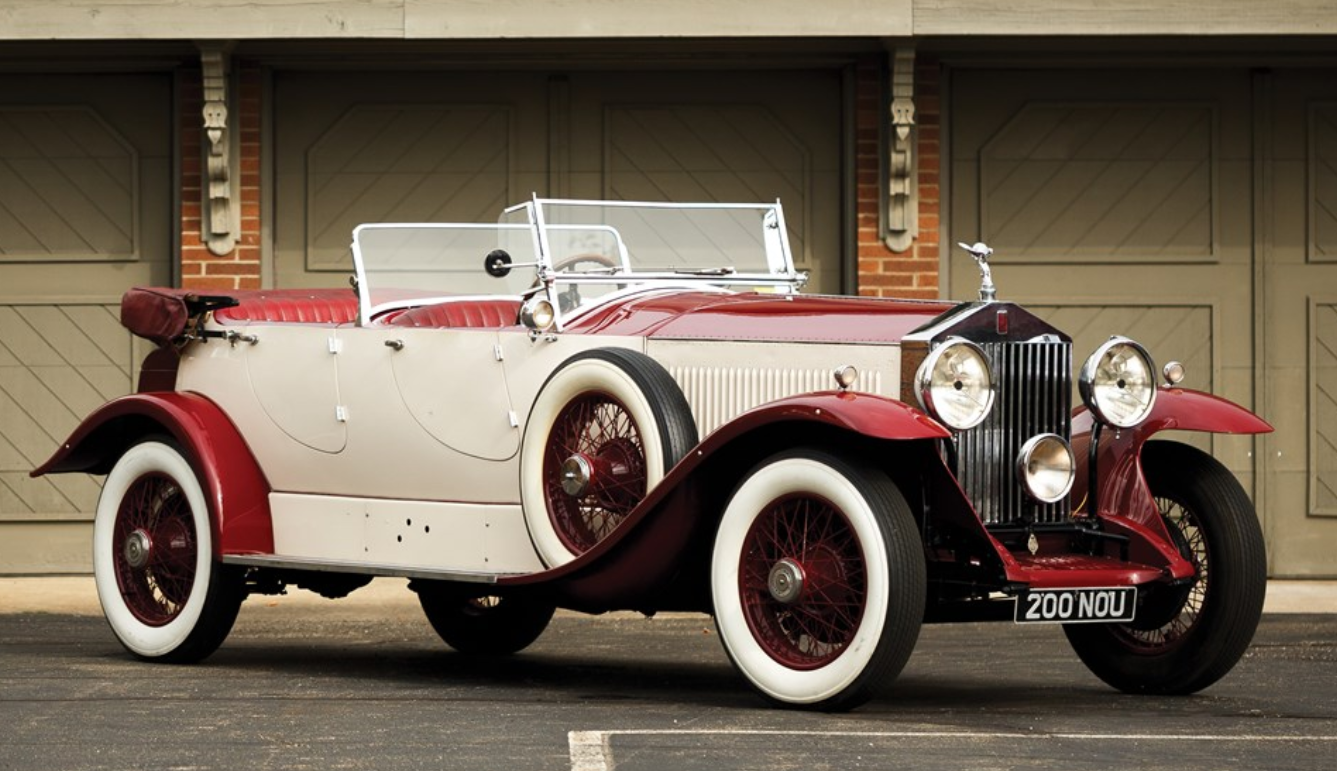 RM Sotheby’s description: The New Phantom, retrospectively dubbed the Phantom I, replaced the venerable Rolls-Royce 40/50 HP Silver Ghost in May of 1925. Retaining many of the remarkable capabilities of the Ghost and offering an impressive scale with refined lines, all things considered, The Autocar summarized its review of the new Phantom in its 22 May 1925 issue by stating that a road trial “indicates further progress toward perfection. Acceleration and speed improved without sacrifice of comfort and refinement.” 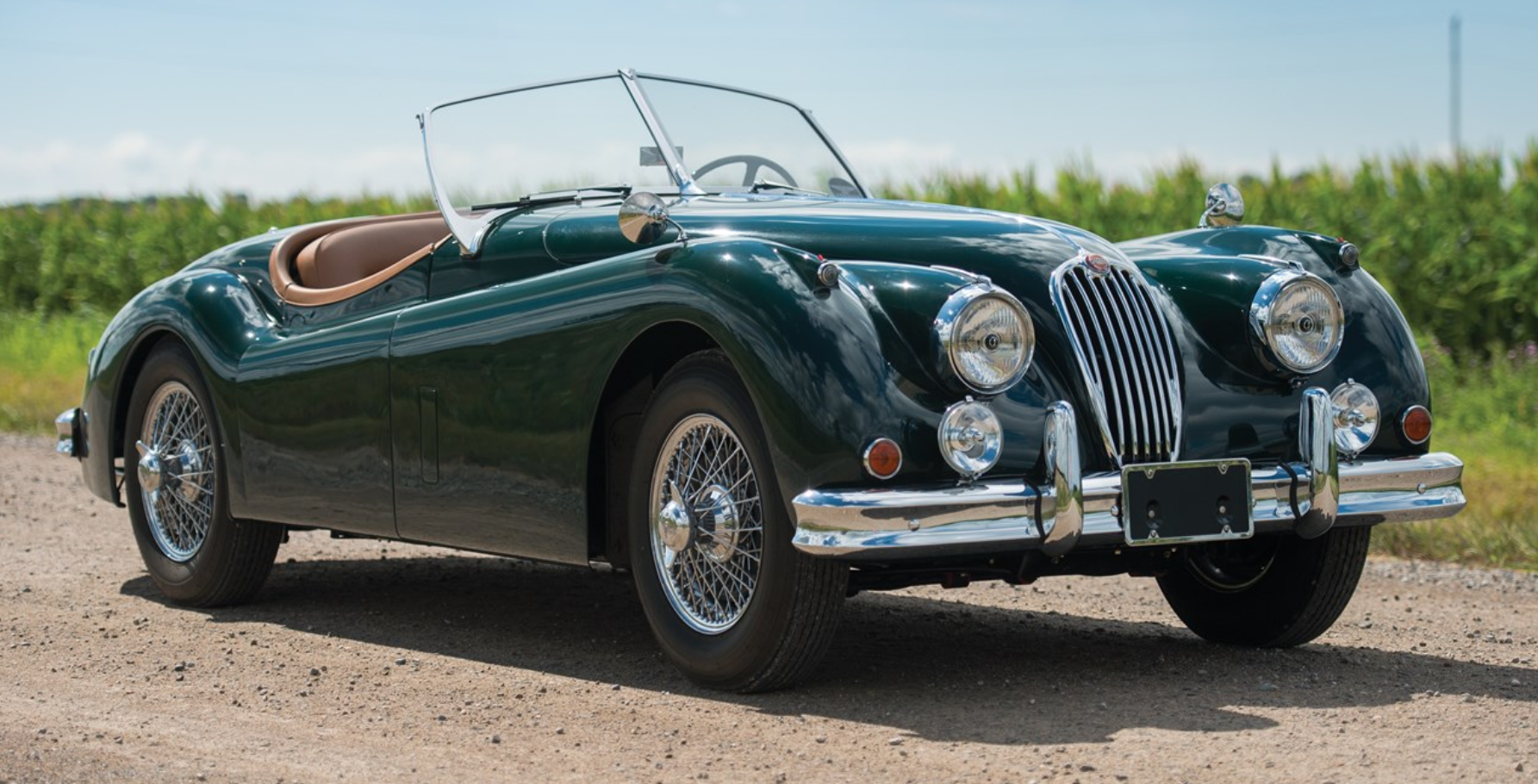 RM Sotheby’s description: In 1948, the XK series of sports cars was unveiled, the first sports cars offered by Jaguar since the SS 100. The first of the series, the XK 120, served as the testbed for the legendary C-Type and, later, the D-Type. The XK 120s were spartan, unbelievably quick, and purpose built to turn the fastest possible laps. The road-going models were significantly faster and handled better than just about anything else on the road.

Unfortunately., like many sports cars, it lacked in overall interior room and comfort. These concerns were rectified with the XK 140. 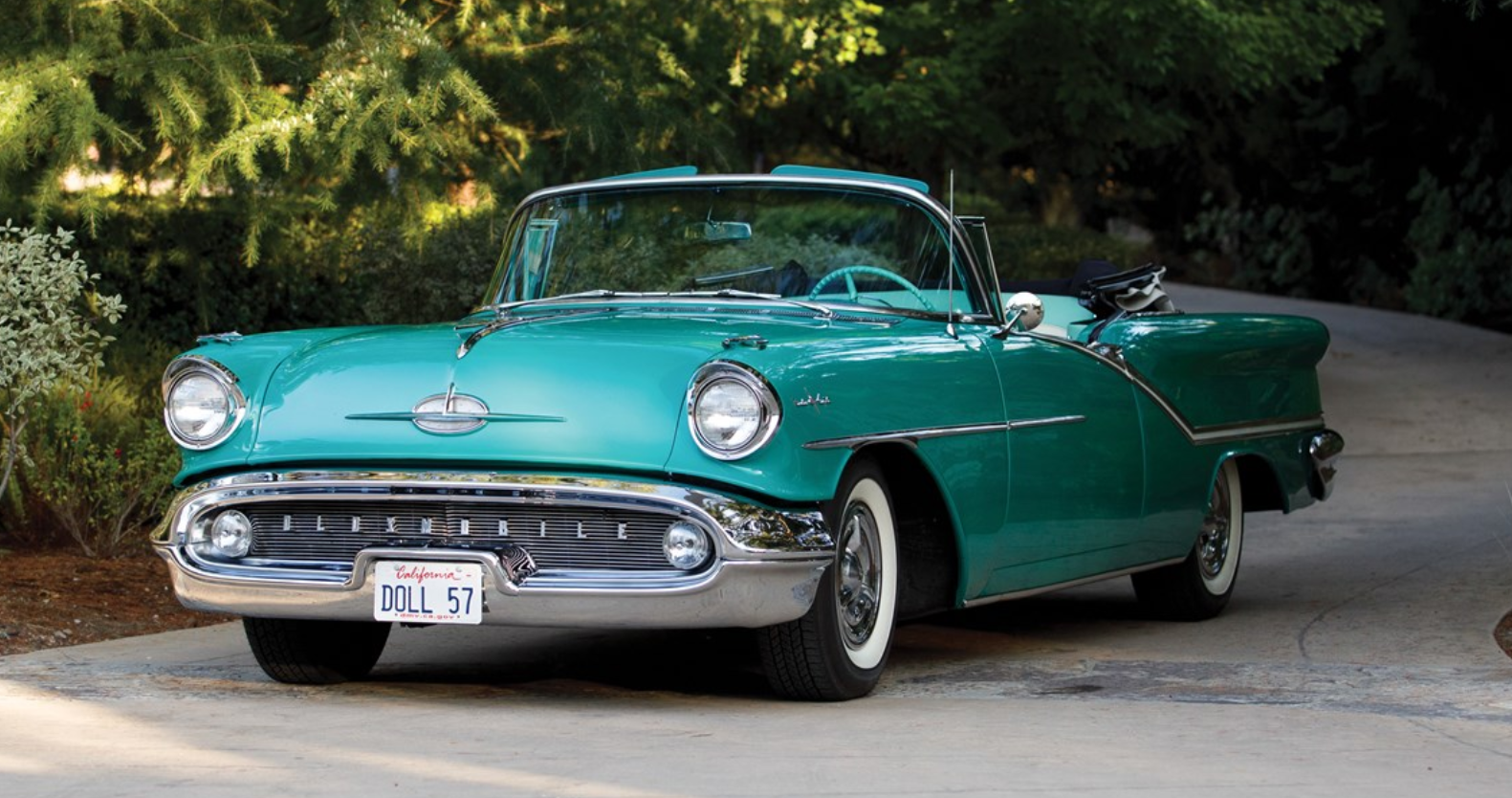 RM Sotheby’s description: In the decade following the end of the Second World War, Oldsmobile provided the burgeoning American middle class with automobiles that were faster, more luxurious, and more graceful than many of its competitors. Oldsmobile cemented itself as one of the preeminent manufactures of the period by offering powerful V-8 engines and standard features that were otherwise optional on competitor’s cars.

RM Sotheby’s description: Introduced in 1957 and offered for just three years, the Skyliner was perhaps the most desirable and fascinating model in the Fairlane 500 range. Replacing the previous Skyliner’s glass roof, the car’s retractable metal hardtop could slide the rear deck. It was a complex symphony of circuitry, relays, reversible motors, and some 610 feet of wiring. Still, it created an automotive spectacle none were likely to forget. 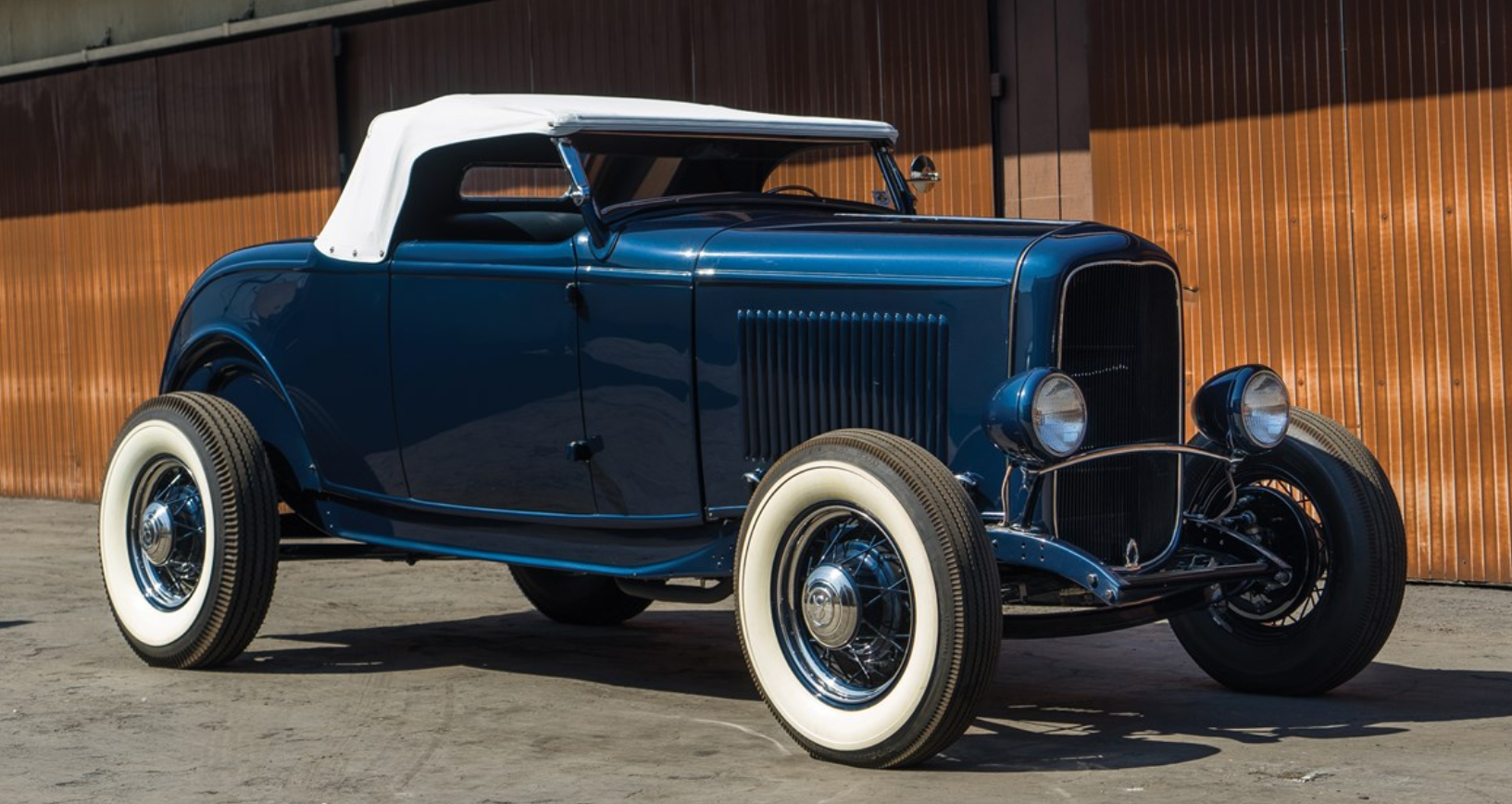 RM Sotheby’s description: Presented here is a 1932 Ford highboy roadster with remarkable history. Restored as it looked in the early ’40s. It will always be known as “the hot rod that beat the racehorse.”

Back in 1944, a guy with a quick quarter horse won countless bets challenging cars to races. This roadster, however, had a reputation as the quickest car in the San Fernando Valley. With Pete Henderson behind the wheel, in a specially staged race held in La Habra, this was the only car that won.

RM Sotheby’s description: The seventh edition of the series, the 300 G of 1961, marked the final expression of Virgil Exner’s “Forward Look”. It continued to represent perhaps the ultimate American automotive statement of the era. Stylistic revisions for 1961 included canted headlamps and a revised rear-end treatment. The 375-bhp, 413-cu. in. wedge-head V-8 offered ample performance with its tuned dual cross ram intake. This meant it could propel the 4,200-lb. 300 G from rest to 60 mph in just over eight seconds.

Topics in this article: Auctions