Starship Technologies has launched the first robot delivery service in a UK town centre with the rollout of its service in central Milton Keynes.

The robot delivery service has been in limited operation in the UK since April 2018 in suburbs of Milton Keynes, however the rollout in the centre of town marks a key step for Starship.

Residents and those working in the town centre can order food and drink from a wide selection of businesses in the city through Starship’s app, which will then be delivered autonomously by one of its fleet of on-pavement robots.

This will allow the company to expand its rate of deliveries, which currently stand at 100,000 within Milton Keynes since it launched.

“We’re excited that both residents and workers can now enjoy this low cost and convenient benefit in the centre of Milton Keynes, and we hope that it will make the town an even more attractive place to work in the future.”

Starship already has its robots deployed in several locations in the US, including several university campuses, however its project in Milton Keynes represents its first efforts in the UK. 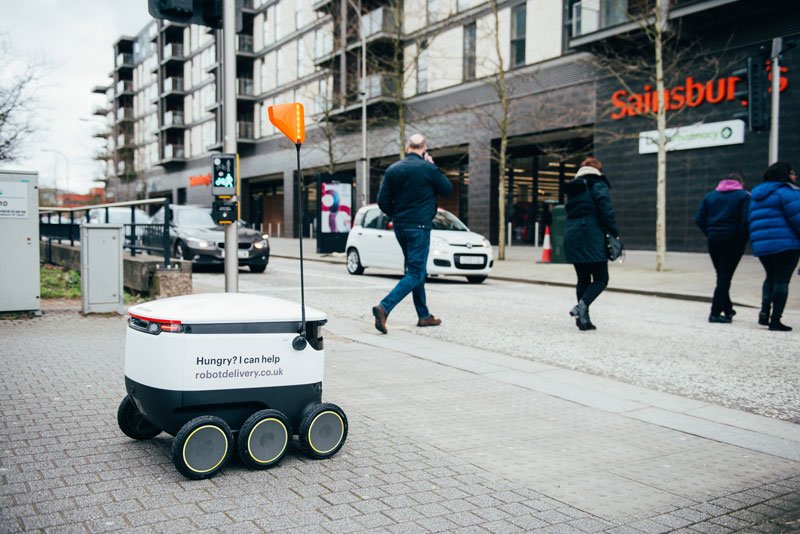 It is hoped that the electric robot delivery service will help reduce road congestion and therefore emissions in the town, which regularly exceeds 100% traffic capacity.

“We’re living in an era where we are more conscious about the individual effect we’re having on the environment, and the centre of MK can get very congested. Hopefully this new service will ease congestion in the centre and make it that bit more environmentally-friendly, whilst giving workers the opportunity to experience robot delivery in a town on the front line of new technological advancements,” said Sam Crooks, the Mayor of Milton Keynes.

“The robots have become an iconic sight in the town and everyone’s excited at the prospect of them delivering in the town centre. For the 180,000 people who work in the centre of MK, this means that they can get their lunch delivered to them conveniently, saving them time during their working day.”