Robotic gloves that not only reduce the strain on workers but learn and improve over time are set to become an increasingly common sight in factories after the launch of an updated soft robotic strengthening system known as Ironhand.

The technology is designed to reduce strain for workers, strengthening their grip and so allowing them to work longer with less effort without getting tired or risking strain-related injury.

The first version of Ironhand, which launched a year ago, provided grip-strengthening capabiltiies, but the updated version announced today significantly improves on the technology, not only through design refinements but with the introduction of an intelligent system that optimises over time.

This works by imitating and enhancing the hand’s existing movements, applying refinements as it is used to effectively tailor itself to its user.

The data the robotic gloves collect is also used to monitor and ensure ongoing safety by allowing companies to identify workers or tasks that carry a higher risk of injury through strain.

Robotic gloves for factories and beyond

Ironhand, which is developed by Bioservo Technologies, is worn as a single lightweight glove, but is connected via cable to a backpack that carries a portable power pack.

It is designed to trigger its Soft Extra Muscle (SEM) technology when a user attempts to apply grip, providing up to 80 Newtons (N) of additional force to augment the wearer’s own strength. This kicks in within milliseconds, making the technology natural to use within working environments.

While the robotic gloves are primarily designed for use in factory settings, Bioservo also sees significant potential in the construction industry, where many tasks are grip-based. 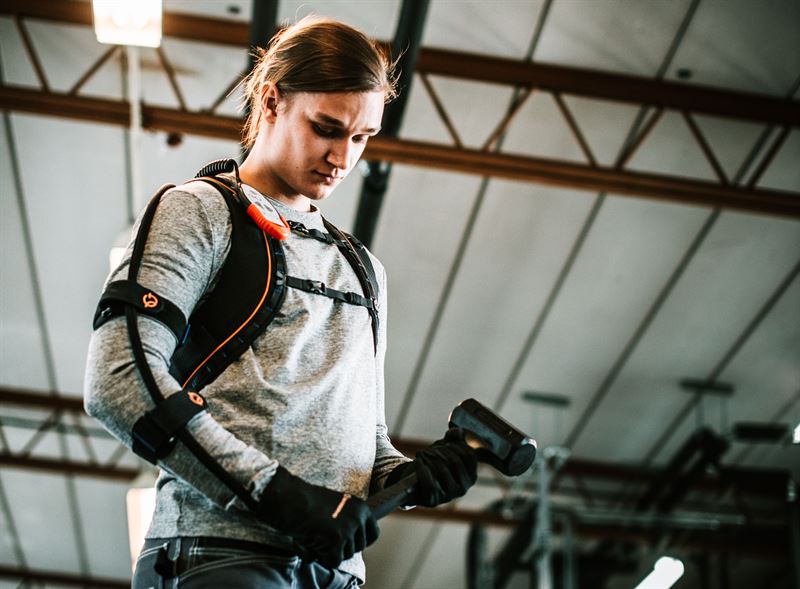 Ironhand soft robotic gloves are powered by a battery pack in a custom backpack.

Ironhand is one of a growing number of products that are utilising soft robotics to augment the wearer’s own physical capabilities.

These are increasingly being explored for assistive applications among the disabled and elderly, but with an often ageing manual workforce and growing concerns surrounding health and safety, companies are increasingly interested in applying the technology at work.

“Since the launch of Ironhand, about a year ago, we have noticed an increasing interest from a large number of industrial players,” explained  Petter Bäckgren, CEO of Bioservo Technologies.

“The technology has continuously been tested and evaluated by our partners and customers to ensure its suitability in meeting the market requirements. We are very pleased to now introduce the all-new Ironhand with its significant improvements aiming to further prevent strain injuries and support the worker.”

Read more: Self-healing rubber could be “game-changing” for soft robotics