Convincing Russians to elect him isn’t the difficult part. Putin’s approval rating sits at around 80% and his nearest rival is only expected to take 7.1% of the vote. However, getting them to vote at all is proving a challenge.

Many feel that, as there is nobody capable of challenging Putin, there is little point in voting at all.

“I doubt that I’m going to vote for anyone. All my childhood was under Putin. Sometimes you want something different,” young student Nikita Nazarenko told Reuters.

However, in a special address to voters ahead of the election, Putin urged Russians to vote on Sunday:

“It is a personal decision of each person for whom to vote and how to fulfil their right to a free choice. But if one abstains from this decision, then this key and determining choice will be made without taking into account your opinion.”

“We in Russia have always decided our fate ourselves, and acted according to our conscience, the understanding of the truth and justice and our love to the motherland.”

“That’s why I ask you to go to the ballot stations on Sunday.”

A Putin victory is all but guaranteed in Sunday’s election. However, if only a small percentage of the population votes, this offers an opportunity to suggest that Putin’s re-election is due to a lack of competition, rather than actual approval among voters.

According to Kremlin sources, as reported by the Russian media, Putin is targeting a 70 percent turnout on Sunday.

Given that turnout reached a record low in the 2016 parliamentary election (just 47.8% of voters turned out), Putin has a job on his hands.

However, Putin has made a hearty attempt to ensure that this Russian presidential election receives the most votes since 1991. The Kremlin has put messages reminding people to vote on everything and anything, from newspapers to milk cartons.

Likewise, the Putin PR machine has been working on some more unusual campaigns in an attempt to maximise turnout.

Putin will be luring voters to polling stations on Sunday with the promise of free iPads and iPhones. The Kremlin has advised regional officials to offer prizes to those that post selfies taken at polling stations to popular Russian social network VKontakte, according to leaked documents seen by Russian news source RBC Daily.

Two Russian PR agencies have been hired at a cost of $13 million in a bid to boost voting numbers.

One region, Yamal-Nenets, has taken the Kremlin’s advice. Users who receive the most likes of their images will win one of 1,300 prizes that include Apple gadgets, bicycles, and digital cameras. In a region of 523,000, those seem like fairly good odds.

In Moscow, those that vote will be offered free cancer screenings, while younger voters can get hold of free concert tickets for turning out.

Having already played their part in the United States presidential election and the United Kingdom’s decision to leave the European Union, the Kremlin’s army of social media bots have turned their attention to a topic a little closer to home.

Somebody has created thousands of YouTube bots. These accounts are being used to downvote anti-Putin election videos and streams. They are also targeting those suggesting to boycott Sunday’s vote. Likewise, those that are pro-Putin and pro-election receive thousands of upvotes.

Similarly, Russian influencers on platforms such as Instagram have been sharing their approval of the election process and urging Russians to turn out. Users aren’t marking these posts as advertisements. This suggests that somebody isn’t paying them to share these views. However, it seems somewhat obvious who is behind it all.

In the days ahead of the election, Dmitry Kiselyov, a journalist for the government-owned Rossiya Segodnya news agency, released a two hour campaign video focusing on the Russian leader, his many successes and the successes that are still to come.

While the documentary has been accused of homophobia and racism in some parts, it has been well-received in Russia. According to Russian media, it is one of the most viewed videos of all time, having received 3.3 million views within 24 hours.

Seemingly, the Kremlin wanted to remind Russia just how great its leader is in the hopes that they will show their appreciation at the polls on Sunday.

It seems to have worked. On Russian social network OK.ru, the comment section is full of pro-Putin comments. 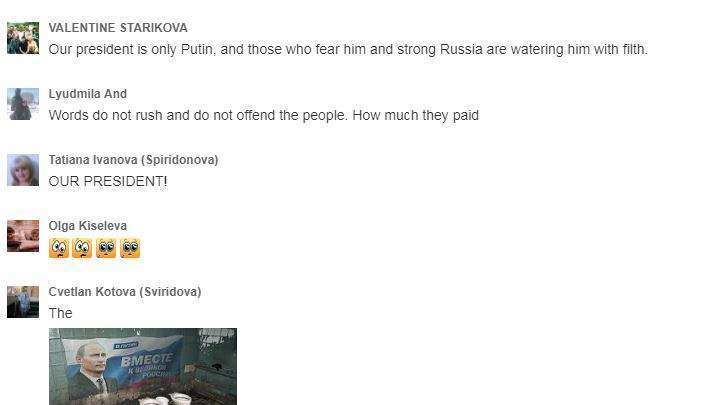 This campaign video was accompanied by the news that Putin will shortly be sending Russia to Mars, which helped somewhat to overshadow the negativity of the Sergei Skripal poisoning.