The discounters are continuing to put pressure on major supermarket chains by the looks of a new survey from consumer surveyor Which.

The latest round of consumer polling by Which found that Aldi impressed with an excellent value for money rating, as well as an overall satisfaction rating of 74 percent.

That put it at the top spot, knocking Waitrose down to fourth place. Waitrose has been Britain’s favourite supermarket for three of the past four years.

According to Which the area where Waitrose lost out was value for money, receiving only two stars out of five. In that category, it performed the lowest of any of the supermarkets polled.

In the report on their findings, Which note that 12.5 percent of all money spend at UK supermarkets is spent at Lidl and Aldi. Just ten years ago, that figure was four percent — clearly the discounters are coming up trumps.

The worst performing supermarket was Sainsbury’s, despite scoring four out of five stars in almost every category. Which quotes one customer who noted it was ‘slightly dull-looking, but reliable’.

The full list of Britain’s favourite supermarkets according to shoppers 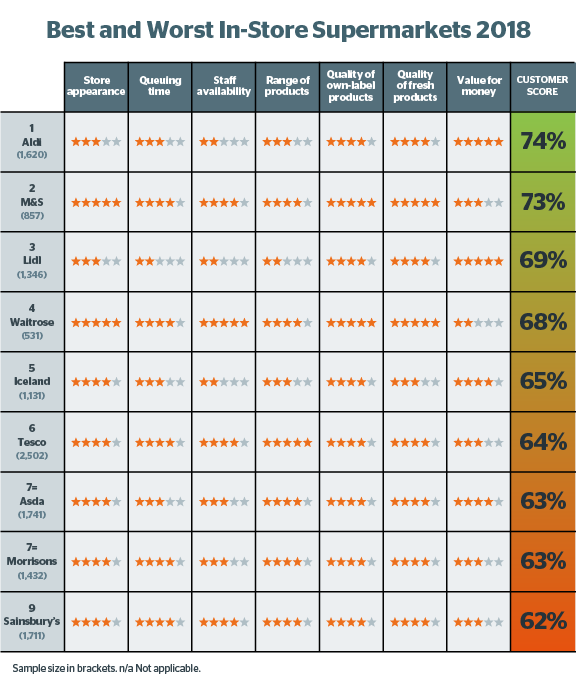 The full list of Britain’s favourite supermarkets. Source: Which

The list clearly displays a stratification of upmarket and budget supermarkets. The so-called big four supermarkets: Tesco, Morrisons, Asda, and Sainsbury’s which sit in the middle of the divide all landed in the bottom four.

During the same surveys, Which also looked into the best providers for online shopping. These included most of the same companies as on the brick-and-mortar store list.

However, there were also a few newer players. These included Amazon Fresh and Ocado.

Once again, the top spots showed a stratification between budget and upmarket supermarkets. No where was this clearer than in the top spot, shared by Iceland and Ocado. 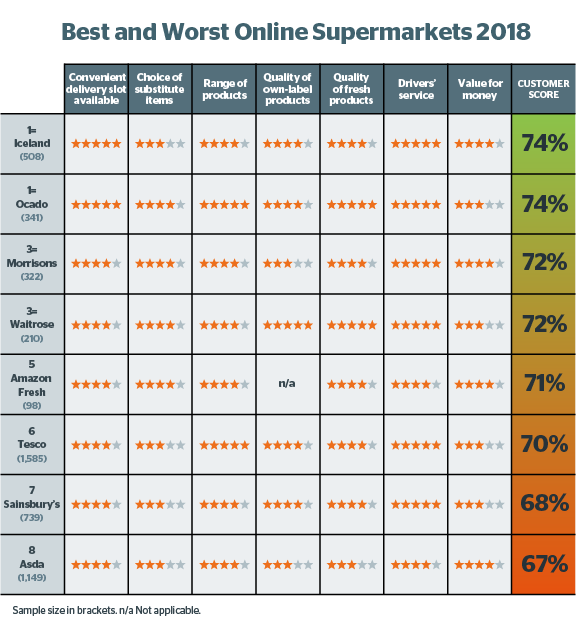 The full list of Britain’s favourite supermarkets for online shopping. Source: Which

The newest player in the list is Amazon Fresh which received four stars in every category it was rated in. However, according to anecdotal evidence presented by Which, customers found the delivery drivers’ punctuality lacking.

Meanwhile, at the bottom of the list is Asda, a place it has been stuck for the past decade. Which suggest the problem is poor quality products, and unacceptable substitutions for out-of-stock products.

Overall, it looks like the discounters are riding high in both lists. Probably good news, considering the recent rumours that Tesco plan to launch a discount brand to rival Aldi, Lidl, and Iceland.