The Atlanta Falcons are taking on the New England Patriots in this year’s Super Bowl final on Sunday night.

The game will take place in Houston, Texas and in true American Football style, is set to be a massive one. Kick-off is 11.30pm London time with the Patriots considered the betting favourite this year.

How many people will watch this year’s event?

Online betting website Sportsbook believes it should be around 116.5m people this year, edging over last year’s high figures. If it’s a really competitive game then expect those viewing figures to go up.

How much do the adverts costs? 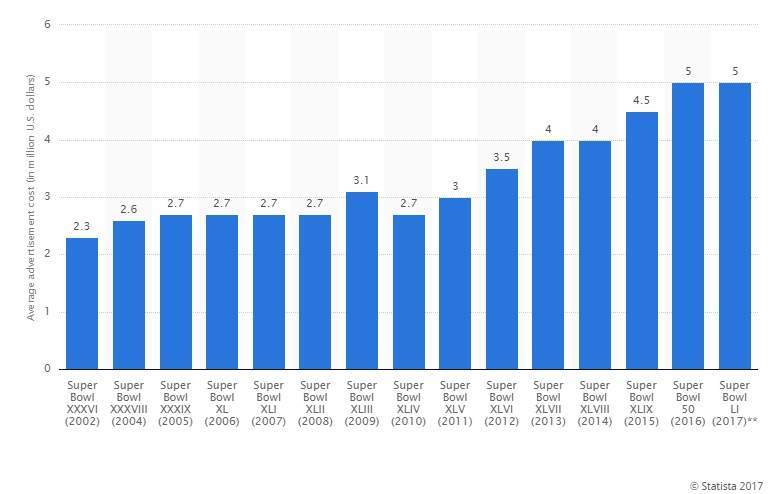 The cost of Super Bowl ads have significantly increased

Ad slots for the Super Bowl are extremely expensive, but that’s the price you pay to have your brand in front of over 100m people.

Fox Sports is reportedly seeking to charge more than $5m for a 30 second commercial during the live show, up from $2.7m just 10 years ago in 2007.

The new charge amounts to nearly $170,000 per second. And if you want any more airtime than that, it’s considerably higher.

Tickets are not cheap

Not counting travel expenses, the Super Bowl tickets will be out of the average fans reach.

You don’t need to go to Houston to spend money 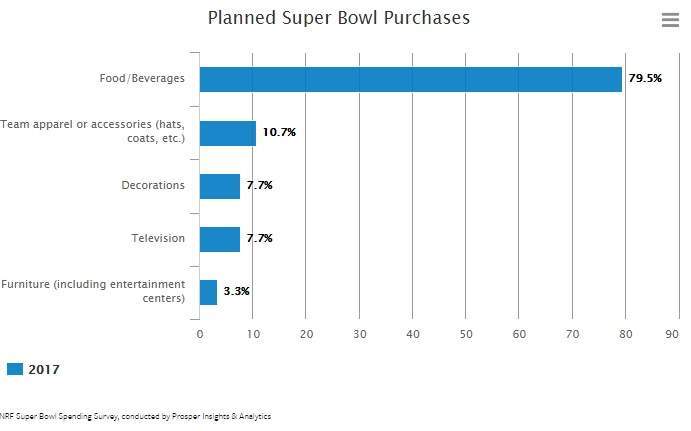 Consumer spending is expected to top $14.1bn this year.

Of the 45m people expected to hold a super bowl party, they will be spending an average of $75 on food and decorations to celebrate the game.

Around 12.4m are planning to head to a bar or restaurant to catch the game.

Here’s where to watch the game in London

It may not start till 11.30pm on Sunday night but a substantial amount of Brits will be staying up to watch the big event. Here’s the top three places to watch it in London:

Budweiser is taking over the Shoreditch street food space Dinerama to bring the Super Bowl live to the UK. Sample the American-inspired dishes from a range of street food trucks and of course, drink Budweiser. Tickets are available here.

Broadway House is offering free entry to its bar on Sunday night but booking a table is advised to grab a comfy spot. Take advantage of the Houses’s ace nachos and wings as well, while you celebrate the Falcons taking on the Patriots. Information is available here

With a free beer with every ticket and a reduced bowling lane rate, Bloomsbury Bowling is holding a huge party on Sunday. As well as the game there is food, karaoke, bowling and pool for those slow-done moments throughout the night. Tickets are available here.

Topics in this article: American football, Sport, Super Bowl, US