The European Subscription Video on Demand (SVoD) market is highly competitive, with an increasing number of global and local players competing for market share.

Securing the right content is a key element for companies looking to succeed in the over-the-top (OTT) video space. Several SVoD service providers such as Netflix and Amazon have been increasing their content production budgets over the last several years to attract customers with exclusive and original content tailored for European audiences.

For example, Netflix is estimated to spend close to $1bn in 2019 on content production in Europe. As new EU regulation on SVoD content quotas come into play, which demands European content comprise of at least 30% of the VoD platform’s catalogue, large production companies such as Disney and HBO are increasingly locking up their own content into their proprietary platforms.

The lines between traditional linear pay-TV and OTT video services are blurring as live content is being increasingly added to SVoD content portfolios.

Amazon Prime Video for instance, now offers live sports coverage, including the Premier League (in the UK only), US Open Tennis events and NFL games. We expect this trend will accelerate in the coming years as competitive live sports is one of the most important content categories in Europe.

These content-focused strategies will further accelerate the take-up of SVoD players in Europe. We expect the European SVoD market to grow at a 5.6% compound annual growth rate between 2019 and 2023, reaching 75 million subscriptions at the end of the forecast period.

In the chart below, GlobalData illustrates the evolution of SVoD accounts in Europe for the years 2019 and 2023. 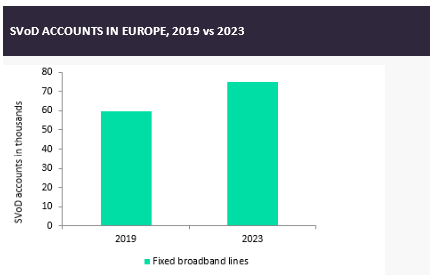