Good morning and welcome to Tech Report Weekly 16 November. This week in tech Nvidia looks set to benefit from a strong gaming market when it reports Q3 results. Fintech leaders gather for CB Insights’ Future of Fintech online conference. And cybersecurity firm Telos is expected to go public in a $255m IPO.

Now that the dust is starting to settle on the US election, we use this week’s Spotlight to explore how a Biden admiration might attract tech talent to US shores. The Verdict team has also highlighted some of the top technology journalism we’ve been reading from around the web, as well as key quotes, news and features from our own reporting. If you’d like all of this sent straight to your inbox every Monday at 7am, subscribe here.

Why it matters: As with many tech companies, it’s been a strong year for Nvidia. Revenues in Q2 increased 50% to $3.87bn as the GPU maker benefited from a gaming boom and demand for high-performance home computers as record numbers work from home. Despite this, data centre sales surpassed gaming sales for the first time in the previous quarter, surging 167% year on year. CEO Jensen Huang expects gaming to take centre stage once more, though, stating in August that this quarter “may very well be one of the best gaming seasons ever”. Analysts tend to agree, forecasting overall revenues to increase to $4.41bn in Q3. This quarter Nivida also announced its acquisition of UK CPU maker Arm, an investment expected to benefit revenues in the long run and solidify its position as a semiconductor powerhouse. Nvidia could also experience a sales bump from the current Bitcoin bull run, with its speedy graphics cards popular among cryptocurrency miners.

Elsewhere Chinese internet giant Baidu reports earnings, with analysts forecasting revenues to come in at $3.92bn. The rollout of its latest conversational AI system, DuerOS 6.0, is expected to boost revenue growth this quarter. The company also launched its first portable consumer electronics product this quarter, the XiaoduPods. They are powered by DuerOS 6.0 and expected to fuel top-line growth.

Why it matters: What does the pandemic, recession and a drop in funding mean for the financial services sector? That’s one of the key themes underpinning the Future of Fintech event, which brings together 1,500 executives from major financial institutions, disruptive startups and the venture capital community. Talks cover topics ranging from AI, blockchain, data privacy and much more.

Among the speakers are Plaid founder Zach Perret, Robinhood Chief Operating Officer Gretchen Howard and SEC Commissioner Hester Peirce. The three-day event has more than 40 hours of content across five streams, with opportunities for 1:1 networking, including virtual reality simulations. Although lets face it, no matter how good the VR you can’t replace a serendipitous introduction in line for the nachos stand.

How to follow it: You can register for the event here ($).

Why it matters: Virginia-headquartered cybersecurity company Telos is set to go public this week, offering 12.35 million shares at an initial price range of $16 to $18, with an offer pricing of $255.7m. The company provides cybersecurity products for consumers and enterprises, as well as secure networks. The company counts Fortune 500 enterprises such as Amazon, Microsoft and Salesforce among its customers. It will list its common stock on the NASDAQ under the ticker symbol ‘TLS’.

Why now? First, remote working has brought the need for robust cybersecurity products into sharp focus for companies, which means more revenues for vendors such as Telos. In the first half of 2020, Telos reported revenues of $87.5m. Second, its revenue has increased for the past three consecutive years, netting $159.2m in 2019. However, the company isn’t generating net earnings, but has been steadily trimming down losses. Management plans to use part of the IPO funds to expand its channel development and pay off debts.

How to follow it: Telos is expected to IPO on Friday.

Innovation takes flight: The future of aviation as seen by the CAA 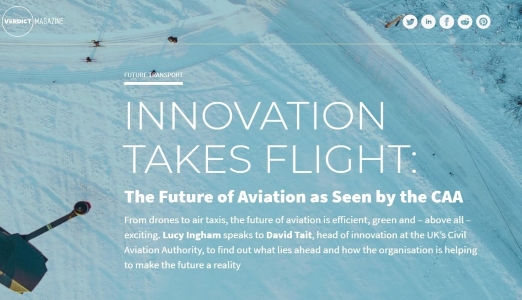 Spotlight on: Tech talent under a Biden administration

Despite Donald Trump’s last-gasp lawsuits, many are already turning their attentions to the policies that president-elect Joe Biden could bring in. For the tech industry, this has largely focused on what the Biden administration could mean for Big Tech and social media, particularly regarding antitrust measures and the ongoing issue of misinformation. However, a pledge to undo restrictions put in place by Trump on the H1-B visa scheme could offer a promising way of narrowing the skills gap in the US tech industry. The H1-B visa scheme allows companies to employ overseas professional workers for specialised roles in the US for up to six years. The scheme is particularly important for the tech industry, which relies on overseas workers to fill many of its roles.

Earlier this year, the Trump administration announced it was taking action to “tighten foreign worker visa requirements”, and in June new H-1B visa applications were suspended until the end of the year. Last month, this ban was blocked by a district judge. Critics have argued that the restrictions make it harder to hire enough specialised workers to fill roles. This is especially significant as the US is currently facing a skills shortage, with 69% of US employers are struggling to find skilled workers, according to research by ManpowerGroup. But this looks set to change, with Biden has pledging to increase the H-1B visa limit in an overhaul of Trump’s restrictions.

“Biden’s approach to immigration reform suggests he will be more favourable to global tech, particularly given how regularly US tech companies come up against caps limiting the number of overseas employees who can obtain visas,” says Russ Shaw, founder of Tech London Advocates and Global Tech Advocates. If Biden does increase the H-1B visa limit, it could redirect more international tech talent to the US once again.

“We would ask the government to work with social media companies, charities and other organisations that have access to data that can provide insights about issues of public concern, and to make that data more accessible for research and public good practices.”

– Louise Burke, ODI managing director, on how the pandemic has reshaped the data ecosystem.

BioNTech: the German biotech behind the coronavirus vaccine

For Sifted, Freya Pratty takes a closer look at the biotech startup working with Pfizer on a promising coronavirus vaccine.

‘It’s the screams of the damned!’ The eerie AI world of deepfake music