Good morning and welcome to Tech Report Weekly 22 June. This week in tech we look at SoftBank’s upcoming AGM, the Collision conference and the UK’s exploration of a Huawei 5G rival.

We’ll also be shining the spotlight on the ill-fated NHS contact-tracing app and how it has gone from “world-beating” to “cherry on top” to an afterthought. The Verdict team has also highlighted some of the excellent technology journalism we’ve been reading from elsewhere, as well as key quotes, news and features from our own reporting. If you’d like all of this sent straight to your inbox every Monday at 7am, subscribe here.

Have a wonderful week and we hope you enjoy Tech Report Weekly.

Why it matters: Things haven’t been easy for SoftBank of late. Still reeling from a host of bad investments – most notably the embattled workplace rental startup WeWork – the pandemic has put further strain on its business.

In May it reported a recorded $12.7bn annual loss – the first in 15 years. SoftBank chief Masayoshi Son has taken responsibility for his ill-fated backing WeWork, but going into the AGM he faces another brewing storm thanks to SoftBank’s complicated relationship with Wirecard AG. The German fintech is trying to establish how it has ended up with a €1.9bn black hole. Masayoshi will likely seek to reassure investors that SoftBank’s exposure to the troubled firm is limited – SoftBank did not invest in Wirecard AG directly but a figure at SoftBank’s Vision Fund had reportedly been due to join Wirecard’s board through the partnership.

How to watch it: Participants will be joining the 10am (JST) meeting remotely.

Why it matters: Dubbed “the Olympics of tech”, the three-day event features a stellar line up of speakers who will explore the latest technology trends.

How to watch it: The event has moved online due to the coronavirus pandemic, but those who have purchased tickets can watch the talks here.

What’s happening: The UK government’s Science and Technology Committee will hear from experts about the feasibility of creating a domestic 5G alternative to Huawei and other “high risk” vendors.

Why it matters: For all the allegations that Chinese technology giant Huawei is in thrall to the Chinese state, there is one inescapable fact – the UK has no domestic alternative to provide 5G infrastructure. How did this happen, and is it too late to start from scratch? In April the Science and Technology Committee set up an inquiry to find out.

On Wednesday representatives from techUK, the University of Bristol and Telecom Infra Project will explore the main barriers a UK Huawei alternative will need to overcome, whether an international partnership with Five Eyes is a more effective approach and a realistic timeframe to meet these objectives.

How to watch it: Following a private meeting, the public evidence session will take place from 2:30pm BST. You can watch it live here.

Neurosity: The Startup Bringing Mind-Controlled Computing to the Masses 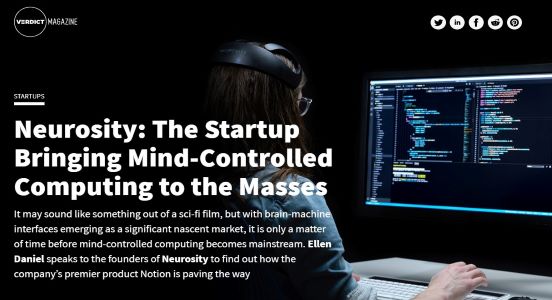 It may sound like something out of a sci-fi film, but with brain-machine interfaces emerging as a significant nascent market, it is only a matter of time before mind-controlled computing becomes mainstream. Ellen Daniel speaks to the founders of Neurosity to find out how the company’s premier product Notion is paving the way.

There are few things that serve as a better case study for what not to do in a tech project that the UK government’s contact-tracing app debacle. Originally intended as a cornerstone of the country’s coronavirus response, the NHSX-developed app was first announced by Health Secretary Matt Hancock back in April, who dubbed it “crucial” and promised it would be ready for rollout in May.

However, the nature of the app, and in particular its impact on citizens’ privacy, prompted concerns from the outset, which were not helped by one UK minister claiming it was “a key part of the surveillance programme”.

This was also exacerbated by the government’s decision to develop its own technology for the app, and host users’ data on a government-controlled server, rather than use a solution known as the Apple-Google model, which kept data on users’ phones. The reason for this, the government claimed, was that the Apple-Google technology was still being developed and so building a UK-specific system would be faster.

In May the government, bullish that its approach would work, began tests on the Isle of Wight, initially maintaining that a country-wide rollout was just weeks away. But this then got pushed back to June, while concerns over everything from privacy to cybersecurity continued to fester.

As June rolled on, the government was more notably playing down the importance of the app, with it now characterising it as the cherry on top, rather than the main event. And this week, months into the project, the government has made a sharp U-turn. Not only will the app not be out until autumn, but it will use the Apple-Google model that was initially said to be the slower option. It’s a damning state of affairs for the government, but one that the technology community has been utterly unsurprised by.

“I believe, that if nothing else, these past few months have truly ushered in a new era in technology where we are seeing a fundamental shift in how everyone is viewing not only technology itself, but how to access that technology, as well as how we build the technology.”

Coming out trans in tech: An entrepreneur’s experience

Joan Westenberg shares her experiences of being, and coming out as, a trans-woman in tech, in this engaging and eye-opening piece for The Next Web.

How Estonia used its digital state to beat back coronavirus

Known as one the world’s first digital societies, Estonia has used the expertise of its tech community in the fight against coronavirus. Wired’s Morgan Meaker asks how effective this has been.

How years of microaggressions brought down a CEO

The Verge’s Zoe Schiffer takes a deep dive into how patterns of racial insensitivity at free mental health texting service Crisis Text Line culminated in the exit of its CEO.