Good morning and welcome to Tech Report Weekly 26 October. This week in tech the world’s biggest technology companies – Microsoft, Facebook, Google, Amazon and Apple – report their latest quarterly results. NASA is set to announce an out-of-this-world discovery that will have bearing on future Moon missions. And Fortune Global Forum brings a stellar line-up of speakers from the business world to its virtual event.

In this week’s Spotlight we take a deeper look at cryptocurrencies and how recent developments are gradually increasing mainstream adoption. The Verdict team has also highlighted some of the top technology journalism we’ve been reading from around the web, as well as key quotes, news and features from our own reporting. If you’d like all of this sent straight to your inbox every Monday at 7am, subscribe here.

We’d also like to take a moment to thank outgoing Verdict editor Lucy Ingham, who is leaving to head up content at a fintech company. Her hard work and dedication over the past eight years writing across the Verdict network have been pivotal and hugely appreciated. We wish her all the best in her future endeavours.

Why it matters: So far, the pandemic has been a boon for Big Tech’s profits. Demand for their products and services has resulted in swelling valuations at a time when other industries have been brought to their knees. Amazon, for example, has seen revenues soar as consumers switched to online shopping while brick and mortar stores were forced to close. Many of those shoppers have stuck around as economies have reopened, and their spending looks set to drive more than $90bn in sales this quarter for the e-commerce giant.

Facebook has seen engagement rise on its social media platform as more people spend time online during lockdown restrictions. However, many companies have slashed advertising spend and a boycott by more than 1,000 firms against Facebook’s handling of hate speech may have impacted the social media giant’s bottom line. Apple shrugged off initial supply chain disruption to become the first $2tn company earlier this year, but a delayed release of the latest iPhone is not expected to lead to a major dip in year-over-year revenue growth. Meanwhile analysts expect Microsoft to report revenue of $35.76bn (up 8% year on year) and for Google parent Alphabet to record sales of $43bn (up 5.6%).

How to follow it: Microsoft reports its earnings on Tuesday while Alphabet, Facebook, Apple and Amazon report after the bell on Thursday. Visit verdict.co.uk for our coverage and analysis.

What’s happening: The US space agency has made a discovery about the Moon that will have a bearing on future missions to return humans to the lunar surface.

Why it matters: Speculation has been rife since NASA declared that it has made an “exciting” discovery about the Moon. Theories range from further detections of water ice, sub-surface liquid water, or other materials that could be useful for future missions. All of these theories would tie in with NASA’s assertion that the discovery contributes to its “efforts to learn about the Moon in support of deep space exploration”. This is a nod to NASA’s Artemis programme, which aims to send the first woman and next man to the surface of the Moon in 2024. This will see the Moon and Moon orbit become launching off points for human missions to Mars as early as the 2030s.

The discovery was made by the space agency’s Stratospheric Observatory for Infrared Astronomy (SOFIA), a modified Boeing 747SP aircraft equipped with a telescope that flies at over 38,000 feet to avoid 99% of the Earth’s infrared-blocking atmosphere. NASA is announcing the discovery via a press conference. Naseem Rangwala from NASA’s Ames Research Center, who is a project scientist for the SOFIA mission, and Jacob Bleacher, chief exploration scientist for the Human Exploration and Operations Mission Directorate at NASA, are among the participants.

How to follow it: NASA is holding a teleconference at 12pm EDT (4pm GMT) on Monday. You can tune in to the audio via a livestream on the agency’s website.

Why it matters: Upended work models. Accelerated technological change. Worsening inequalities. Anti-globalisation. These are some of the themes that will be explored during the Fortune Global Forum. The two-day, virtual event features short, back-to-back talks from some of the business world’s biggest names.

Among the speakers are CEO of Mastercard Ajay Banga, CEO of Slack Stewart Butterfield, former governor of the Bank of England Mark Carney, along with representatives from HP, Huawei and many more. In addition to technology trends, talks will delve into the hunt for a Covid-19 vaccine. Meanwhile, Sinovation Ventures chairman and CEO Kai-Fu Lee will discuss the accelerating AI revolution during a 15-minute interview.

How to follow it: The event takes place Monday and Tuesday. You can register to attend here. 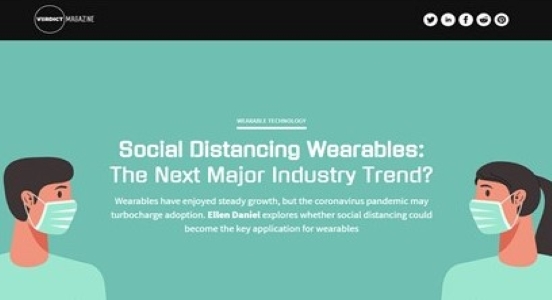 Wearables have enjoyed steady growth, but the coronavirus pandemic may turbocharge adoption. Ellen Daniel explores whether social distancing could become the key application for wearables.

This week saw some big news for Bitcoin. In a long-anticipated move, international payments provider Paypal announced that it would begin allowing users to buy, sell and hold Bitcoin and other major cryptocurrencies through the platform. Set to roll out in the US within a few weeks, and in select other countries in the first half of 2021, the move is set to significantly widen access to cryptocurrencies, increasing the ability of regular people to purchase and use the digital currencies. However, it is a limited move: merchants will not be paid in cryptocurrencies, with payments instead being converted into dollars before being transferred to their recipients. And it is not the first major company to make such a move, following Jack Dorsey’s Square that made a similar choice earlier in the year.

Nevertheless, it is a growing sign that cryptocurrencies are shifting from a fringe product popular with a particularly tech-savvy breed of online user and into the mainstream – and it follows a host of other moves adding weight to that argument. In the investment space, there are now a host of products available to would-be cryptocurrency investors, while cryptocurrencies are beginning to be traded on some stock exchanges. Institutions, including central banks, are also now exploring the technology as a means to ease international payments and combat fraud. But the technology is still not without its detractors, and regulation remains an issue. At the start of October, the UK Financial Conduct Authority banned the sale of cryptocurrency derivatives and exchange-traded notes to retail customers. The decision prompted deVere Group CEO Nigel Green to accuse it of “a staggering lack of understanding” about cryptocurrencies. However, with increasing institutional and investor interest, and well as growing support from Big Tech, the writing is on the wall for the future of cryptocurrencies.

“Tech can be great and used for amazing things, but we have to be careful with the avenues we are going down. Are we progressing long-term or just thinking of a short-term solution that doesn’t actually benefit anyone? What will the world look like in two generations’ time? These are things people need to really think about when talking about accessible technology.”

Gig workers’ only chance to pee is apparently an app

For Vice, Edward Ongweso Jr highlights the dystopian layers of an app that tells gig economy workers where they can go to the bathroom.

Did Sweden’s coronavirus experiment pay off? Not really

Wired’s David Cox looks at the data to ask whether Sweden’s approach to the Covid-19 pandemic has worked.