Good morning and welcome to Tech Report Weekly 3 August. This week in tech the Trump administration has vowed to “take action” against TikTok in the next few days, Uber reports its second-quarter earnings, and Black Hat USA goes virtual for the first time.

We’ll also be shining the spotlight on Big Tech’s rollercoaster week, from a congressional grilling to an earnings blowout. The Verdict team has also highlighted some of the top technology journalism we’ve been reading from around the web, as well as key quotes, news and features from our own reporting. If you’d like all of this sent straight to your inbox every Monday at 7am, subscribe here.

Have a great week and we hope you enjoy Tech Report Weekly.

Why it matters: Hot off the tail from Google, Amazon, Apple and Facebook’s impressive earnings reports last week, ride-hailing firm Uber will reveal how it has fared during the pandemic. The ridesharing industry has faced major disruptions since lockdown measures were put in place around the world in March. Analysts expect revenues for the period, ended 31 June, to come in at $2.17bn. This would mean a 32% drop from a year ago, in a quarter when Uber made losses of $5.2bn on revenues of $3.16bn. Uber, which went public last year, is yet to make a profit. However, Uber’s other revenue stream, such as food delivery arm Uber Eats, have seen increased demand during the pandemic and will likely provide a much-needed cushion for the US firm.

Meanwhile entertainment behemoth Disney will reveal its latest subscriber numbers for its streaming service, Disney+. Last quarter the firm said it had gained 54.5 million paying subscribers since launching in November, a silver lining for the firm after its theme park revenues were dashed by the coronavirus. Rounding off the earnings highlights is Jack Dorsey’s payment firm Square.

How to follow it: Disney post its Q3 results on Tuesday. Square will post its Q2 results on Wednesday while Uber will reveal its Q2 earnings on Thursday.

US to “take action” against TikTok

What’s happening: The Trump administration has said it will “take action” against Chinese software firms, including video-sharing app TikTok, in “the coming days”.

Why it matters: TikTok has become the latest lightning rod for escalating tensions between the US and China. On Friday, President Donald Trump said that he would ban the popular social media app from the US, citing security concerns. TikTok, owned by Chinese firm ByteDance, has denied these allegations. While it’s not immediately clear exactly how Trump would go about blocking the app, US secretary of state Mike Pompeo indicated firm action would be taken this week.

“These Chinese software companies doing business in the United States, whether it’s TikTok or WeChat…are feeding data directly to the Chinese Communist party, their national security apparatus,” Pompeo told Fox News. He added that the administration would “take action in the coming days with respect to a broad array of national security risks that presented by software connected to the Chinese Communist party”. Last week the Wall Street Journal reported that Microsoft was in talks to buy TikTok’s US operations, although that is now reportedly on hold following Trump’s comments. The move to ban TikTok has similarities to the saga with Chinese telecoms firm Huawei. If that is anything to go by, this story will not be going away any time soon.

How to follow it: We’ll be keeping a close eye on any developments on this story – check verdict.co.uk for updates.

What’s happening: Black Hat USA, one of the largest cybersecurity conferences in the world, takes place in a virtual format.

Why it matters: Pre-pandemic, thousands of IT security professionals would head to Las Vegas, US, to learn about the latest trends and research shaping the industry. This year, the crowds will be flocking virtually because of the coronavirus pandemic – but the lineup is no less stellar.

Election security is set to be a big theme at this year’s event, as is the security risks around remote working. Matt Blaze, McDevitt Chair in Computer Science and Law, Georgetown University, will give the day one keynote on “election integrity during a global pandemic”. On day two, Renée DiResta, research manager, Stanford Internet Observatory, will give a keynote on “hacking public opinion”. There will be plenty more throughout the two-day event for security enthusiasts to dig into.

How to follow it: You can register for free for the main event, which takes place on Wednesday and Thursday, here.

Troy Hunt: How to survive the cybersecurity pandemic 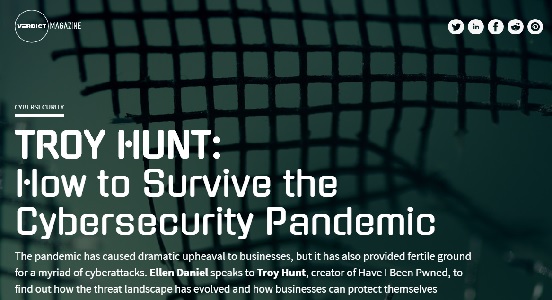 The pandemic has caused dramatic upheaval to businesses, but it has also provided fertile ground for a myriad of cyberattacks. Ellen Daniel speaks to Troy Hunt, creator of Have I Been Pwned, to find out how the threat landscape has evolved and how businesses can protect themselves.

It has been clear for some time that the world’s largest technology firms have gained a market status so dominant that their positions seem unshakeable. Take Google, the world’s largest digital advertising company and most popular search engine. The data it collects on consumers as they browse the web is a gold mine for targeted adverts, but the data is so rich and vast that rivals simply can’t hope to catch up. It is a similar story for Facebook, the second-largest digital advertiser. Amazon has been accused of using its sales data to gain an advantage over smaller sellers on its platform. Meanwhile, Apple faces antitrust probes for the fees it charges to developers to sell their products via its App Store.

Last week the CEOs of the four tech giants made a historic appearance before Congress. For five hours these issues were probed and examined, with US lawmakers (for the most part) armed with well-researched questions. But will it ultimately lead to change? In the short term, it’s unlikely. US antitrust laws are framed around proving market dominance leads to higher prices for consumers. When many of the tech firms under the spotlight offer their services for free, it becomes difficult to prove that consumers are worse off. In the long term, though, the Antitrust Subcommittee’s investigation may lead to a modernisation of antitrust laws that make them fit for the digital age. But in the meantime, the tech giants look set to consolidate their power. Just a day after the hearing, Apple, Facebook and Amazon reported blowout earnings, with Google parent Alphabet the dark spot on the otherwise gleaming report card. Even then, its revenue dropped by just 2% year-on-year at a time when advertising budgets have been reigned in. If a once in a lifetime pandemic can’t slow the march of Big Tech, what can?

Garmin admits ransomware attack, but has its reputation been harmed?

“If Apple is the gatekeeper, what we’ve done is open the gate wider. We want to get every app we can on the store, not keep them off.”

Kyle Wiens unpacks the internal debate around right-to-repair at Apple in this eye-opening piece for iFixit.

How London’s Silicon Roundabout dream turned into a nightmare

Due to the Covid-19 pandemic and the sudden rise of remote working, London’s Silicon Roundabout has fallen silent. Wired’s Gian Volpicelli asks what its future could hold.

The Guardian’s Tom Lamont takes a look under the bonnet of video conferencing tool Zoom and its rise to prominence during the pandemic.