In Jordan, there are three main telecom operators, Zain, Orange, and Umniah. Zain is leading the mobile market with a subscriber share of more than 46%, Orange comes next with 28%, and Umniah holds third place with 26.5%.

Fierce competition in the Jordanian market is coming from the three players and mainly from challenger Umniah. Umniah started operating in Jordan in 2005, it is a subsidiary of Batelco (the Bahraini telco) by introducing pay-as-you-consume plans that charge the mobile voice fees per second when the other players used to charge per minute.  This type of offering has helped Umniah acquire a sizable market share at a relatively fast pace.

Umniah has also been working on improving its presence and footprint in the fixed services segment. Umniah has entered the fiber market in Jordan by offering B2C and B2B fiber packages. To increase its fiber footprint, Umniah created in 2019 a new joint venture, ‘FibreTech’, with Jordan Electric Power Company (JEPCO). FiberTech is a fiberco (fiber wholesale company) that will cover more than 1.3 million premises (households and businesses) with fiber, leveraging JEPCO’s electricity poles. 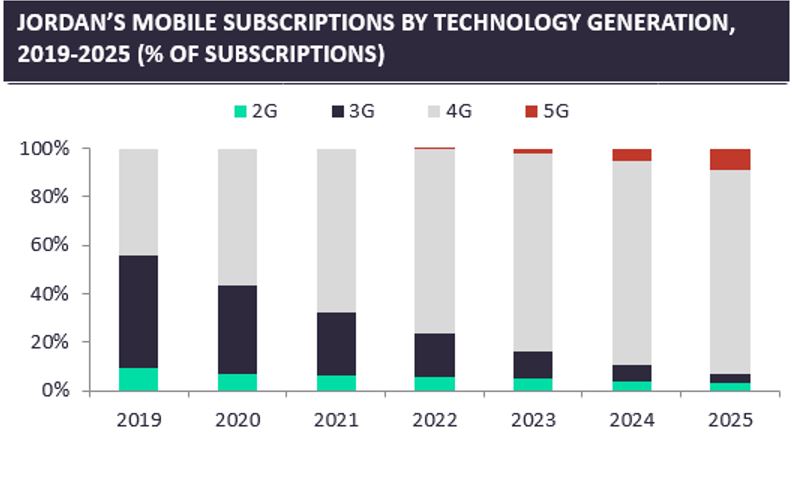 Moreover, in 2021, Umniah announced plans to phase out its 2G network and to further upgrade and improve its 3G and 4G networks and services. By this move, Umniah will be among the first telcos in the Middle East and Africa region to switch off its 2G network.

It is worth noting that 5G is expected to be launched in the market in late 2022. The chairman of the telecom regulator in Jordan has indicated that the 3,640-3,700MHZ and the 3,740-3,800MHz frequency bands will be allocated for 5G services.