Elon Musk is having a big week this week. First, it was the successful launch of SpaceX’s new rocket, the Falcon Heavy, and today Tesla is announcing its fourth-quarter results.

Once the markets close, the electric car company will reveal how much it’s making, as well as how much the company is losing.

Here’s what to look out for at the results announcement.

1. Tesla is making some serious losses

Tesla burns through cash like nobody’s business. There are concerns that the company’s fourth quarterly loss is could be up to $1bn.

Despite the predicted losses, Musk is ever-confident in Tesla’s ability to grow. Recently, he tied his pay strictly to Tesla’s stock performance and profit. Now, he won’t get paid in full until Tesla’s market cap reached $650bn. Until then:

“Elon will receive no guaranteed compensation of any kind – no salary, no cash bonuses, and no equity that vests simply by the passage of time,” says Tesla.

2. Yet, revenues are growing

Tesla has already released its delivery report for the last quarter of 2017. It revealed production of its latest vehicle, the Model 3, had reached 1,000 per week during the final days of December.

As a result, revenue is projected to increase 44.3 percent compared to 2016.

In the final quarter of last year, Tesla revealed its next projects: its electric Truck, the Tesla Semi, and its next-generation Roadster. It’ll be interesting to see what giveaways Musk reveals, such as order numbers and reports.

The US parcel delivery service, UPS, revealed last year that it had ordered 125 Tesla Semi trucks, the largest public pre-order. Investors will be interested in seeing production targets for the trucks into 2018, as well as other order figures. 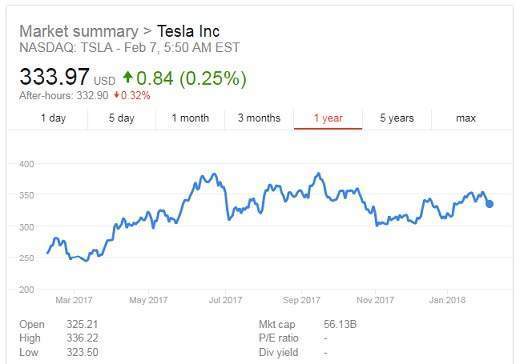