The Freemasons are causing something of a ruckus in Britain at the moment.

The United Grand Lodge Of England has taken out adverts in major newspapers, the Times, the Guardian, and the Daily Telegraph. In these adverts, the governing body of Freemasons complains about the ‘gross misrepresentation’ of Freemasons.

All this is in response to claims from outgoing chairman of the Police Federation, Steve White. In an interview with the Guardian, White claimed that Freemasons within the police were blocking reform:

“What people do in their private lives is a matter for them. When it becomes an issue is when it affects their work. There have been occasions when colleagues of mine have suspected that Freemasons have been an obstacle to reform.

“We need to make sure that people are making decisions for the right reasons and there is a need for future continuing cultural reform in the Fed, which should be reflective of the makeup of policing.”

White suggested that Freemason police members promoted less-qualified fellow Freemasons ahead of other candidates. As the Freemasons are a predominantly white male organisation, this has a knock-on effect on police diversity – he claimed.

The Guardian also reported that two Freemason lodges were located within Westminster, the centre of British politics.

In the Freemason advert, chief executive Dr David Staples argued against the accusations. He cited the £33m charitable donations raised by the Freemasons in the UK last year. Staples also explained that any race, faith, age, class or political persuasion were welcome in the 300-year-old organisation. 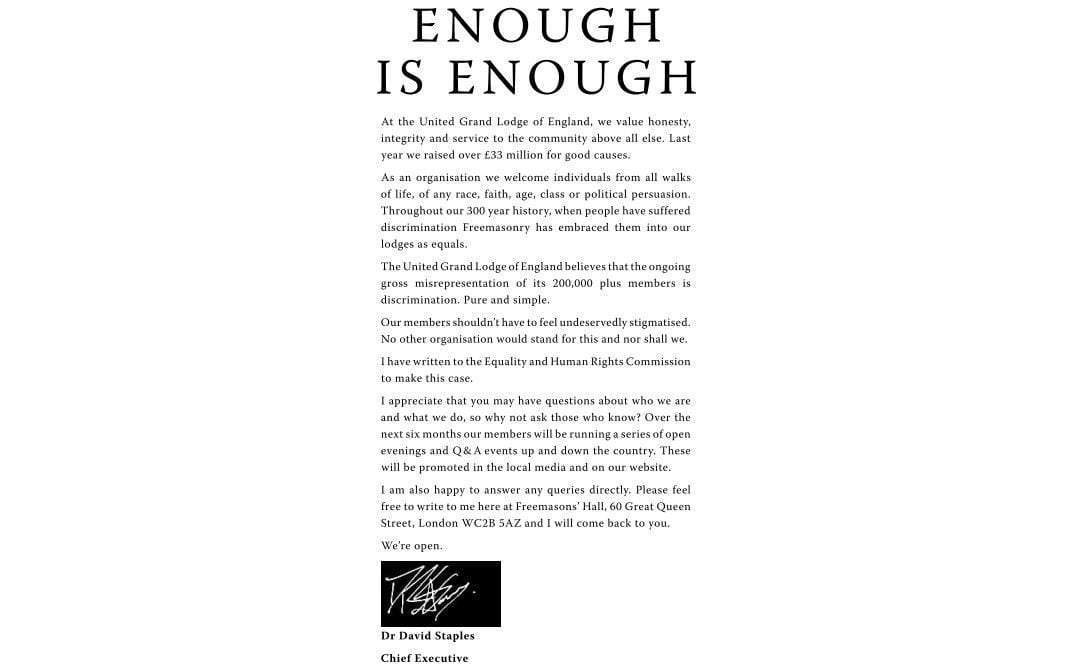 He said there are currently 200,000 Freemasons in England and Wales and over 7,000 lodges.

Despite his defence of freemasonry, Staples refused to share the Freemasons handshake with viewers of BBC Breakfast where he was being interviewed this week. Staples claimed he had “promised” not to do so.

Different handshakes are said to be offered by different orders of Freemasons. This YouTube video claims to show some of these handshakes.

The most famous Freemasons in history

Despite the scale of the freemasons organisation, it can be difficult to work out who is and who isn’t a member. This is partially because of secrecy of the organisation.

Here are the names of some famous figures alleged to be freemasons: