As the results of the 2020 Presidential election continue to come in, Twitter and Facebook have taken action against false claims made by Donald Trump that he has already won.

Due to a high turnout and an unprecedented number of in-mail ballots, several key states are still counting millions of votes, which could continue for several days. However, Donald Trump has prematurely declared victory and made baseless claims about voter fraud.

Earlier today, the president tweeted: “We are up BIG, but they are trying to STEAL the Election. We will never let them do it. Votes cannot be cast after the Polls are closed!” 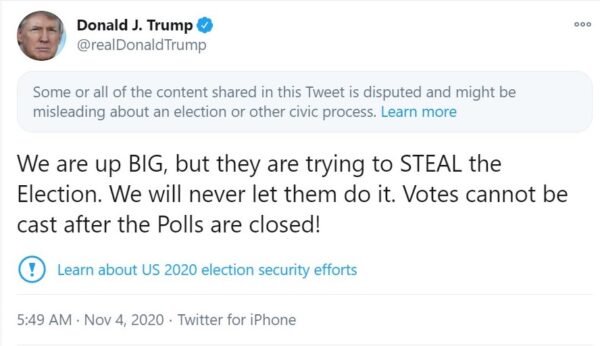 Facebook also added a label to Trump’s election post, informing users that votes are still being counted, but did not take steps to slow its spread.

Once President Trump began making premature claims of victory, we started running notifications on Facebook and Instagram that votes are still being counted and a winner is not projected. We're also automatically applying labels to both candidates’ posts with this information. pic.twitter.com/tuGGLJkwcy

Yesterday, a tweet from President Trump claiming that a Supreme Court decision to allow more time for postal ballots to come in in Pennsylvania would allow “rampant and unchecked cheating” was also flagged as misleading.

Twitter and Facbook have raised their efforts to curb the spread of misinformation relating to the election. Last month, Twitter introducing a civic integrity policy, stating that users “may not use Twitter’s services for the purpose of manipulating or interfering in elections or other civic processes”, with those that violate this risking tweet deletion, profile modification, labelling and permanent suspension.

Twitter has banned all political ads while Facebook has banned ads that declare a premature victory or question the integrity of the electoral process. Facebook has introduced labels for election-related posts with links to information about the election.

As part of Facebook’s efforts to reduce election-related misinformation on its platform, the company stated that it had introduced notifications informing US users that votes were still being counted and a winner had not yet been declared, and that posts from candidates will automatically be labelled with this information. Notifications will also contain links to its election information centre.