The Twitter Android app is down for some users following an update, according to a number of reports.

Users attempting to open the Twitter app on Android devices are met with an error message before the app crashes. 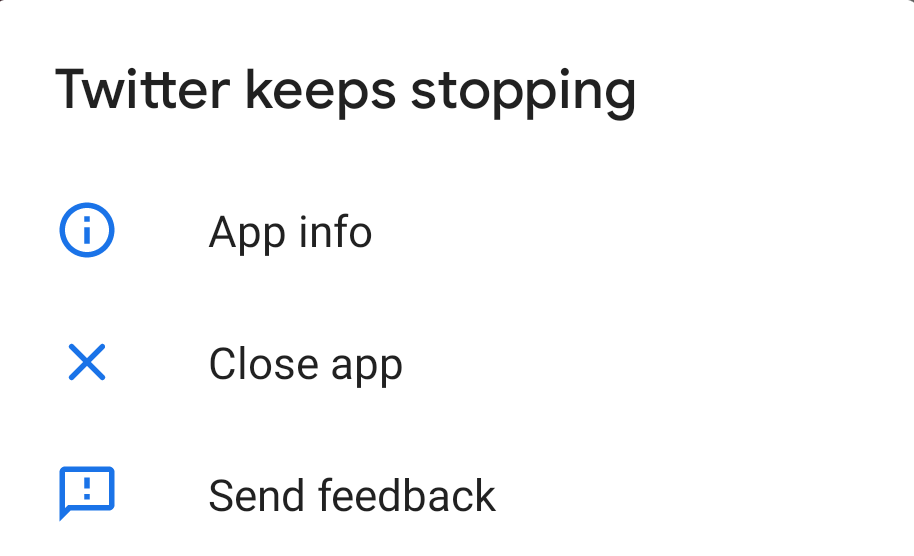 Android users are presented with this message.

It is still possible to access Twitter through a web browser. iOS also appears to be unaffected.

The websites DownDetector and IsItDownRightNow, which monitor reports about sites being down, both show that people are experiencing issues with the social media site.

Reports of the Twitter Android app being down started around 8:30pm GMT Tuesday night, spiking at 7:30am GMT Wednesday.

Some users said they were able to successfully get back on the Twitter app after clearing their cache. However, Verdict was unable to replicate this.

Android app down: Twitter advises to wait on update

Twitter has suggested not updating the app until it has rolled out a fix. This suggests the Twitter Android app outage was caused by a bug in the update.

Here’s the full statement from Twitter: “We’re investigating a problem with the latest version of our Android app that causes it to crash immediately once it’s opened.

“If you use Twitter for Android, we suggest not updating it until we let you know it’s fixed. Sorry for the inconvenience!”

We’re investigating a problem with the latest version of our Android app that causes it to crash immediately once it’s opened. If you use Twitter for Android, we suggest not updating it until we let you know it's fixed. Sorry for the inconvenience!

Hey Twitter can you maybe fix your android app so it doesnt just crash on launch? Thanks #TwitterDown

Why is #TwitterDown only for Android? Fine on iPhone & desktop. It crashes when opening the Android app.

Verdict will update this page with any further news on a fix for the Twitter Android app.

Update 14:48pm: The app now appears to be working after uninstalling and reinstalling it.

The Android app has now been fixed. The latest version (8.28.2) should no longer crash on launch –– you’re good to go ahead and update when it becomes available for you. Thanks for your patience.