Shares in video game publisher Ubisoft jumped as much as 8.8 percent during early trading on Tuesday morning, as the market responded to the company’s impressive revenue results.

Ubisoft reported revenue from the fourth quarter of 2017 on Monday. The company made $890m, as the Christmas rush and the success of the Nintendo Switch helped to boost sales of third-party titles.

Ubisoft sales were buoyed by the success of Assassin’s Creed, one of its major franchises. The developer had taken a year off from releasing a new Assassin’s Creed title. It hoped that starting fresh would improve the quality and halt the franchise’s falling sales and it seemingly paid off.

Released in October, Assassin’s Creed: Origins was the third best-selling game in the Europe and Middle East regions in 2017.

Ubisoft revenue was also boosted by increasing digital sales and recurring revenues, which increased by 75 percent year-on-year. Sales of additional digital content increased by 87.4 percent in 2017.

Between closing on Monday and opening on Tuesday, Google Finance shows that Ubisoft shares rose from $63.60 to $66.60. It has since fallen to around $65.50 at the time of writing. 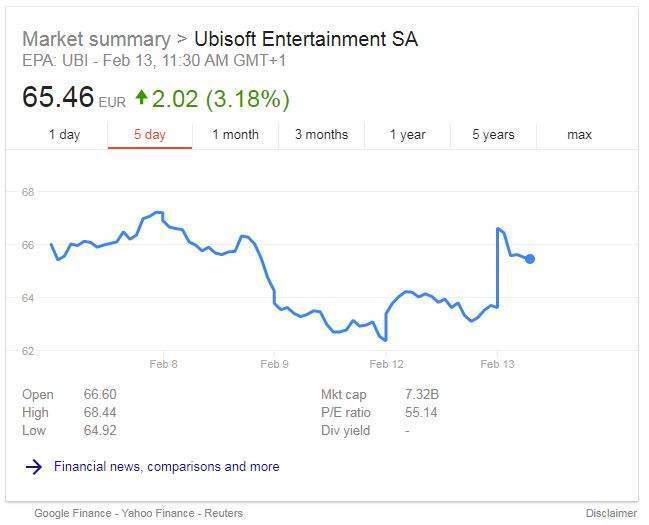 According to the Financial Times, Ubisoft was the best-performing stock on the Europe-wide Stoxx 600 index in the early hours of Tuesday morning.

This is the latest increase in what has been a great year for the video game developer. Ubisoft stock has has almost doubled from $34.50 12 months ago.

Impressive sales and a climbing stock price bodes well for the future of Ubisoft.

The recent climb could halt any potential hostile takeover plans that French media giant Vivendi has.

The company currently has a 25 percent stake in Ubisoft and, according to Reuters, planned on buying more.

Video game fans were concerned that an owner with little interest or know-how in the industry would be damaging to the content that Ubisoft creates.

“In the end, we are convinced that the only positive way forward for Vivendi is to sell its stake and communicate on a huge capital gain.”

Ubisoft was expected to suffer as mobile gaming took off. However, after a number of difficult years in which stock prices fell from a peak of $35 in 2008 to as low as $3.80 in 2011, Ubisoft’s market cap has been growing rapidly since 2015. 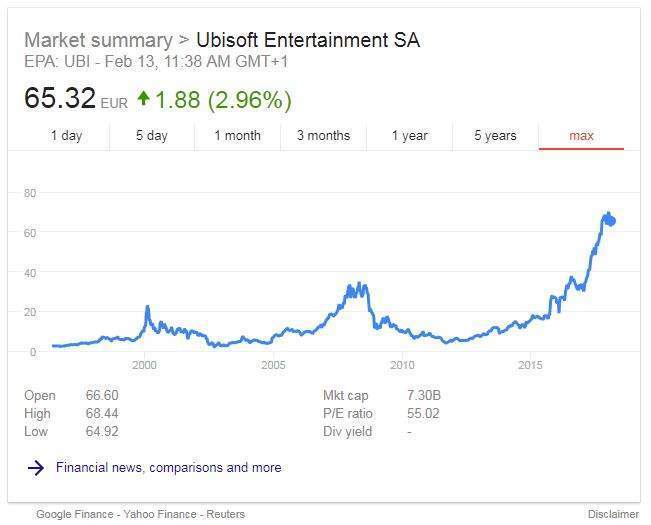 Ubisoft stock may have climbed on Tuesday morning. However, its price is still down almost $5 on its peak of $70.1 recorded on 12 January.