The UK will be paying its Brexit divorce bill until 2064, according to British fiscal forecasting body the Office for Budget Responsibility (OBR).

It calculates the bill will be £37.1 billion ($51.8 billion), right in the middle of the £35 billion to £39 billion range presented by the Treasury in December.

While the lion’s share of the bill will be paid out in the first five years after the UK leaves the European Union — through until 2024 — smaller payment will have to made for almost half a century.

The OBR wrote in its economic and fiscal outlook:

Our forecasts continue to be based on broad-brush assumptions about the economy and public finances after the UK’s exit from the EU, pending a meaningful basis upon which to predict the precise end-point of the Brexit negotiations.

One area where sufficient clarity is now available to be more specific relates to the financial settlement – the ‘divorce bill’ – that the UK will pay after leaving the EU on 29 March 2019. The December 2017 joint report by the UK and EU negotiators detailed the components of this settlement.

The Treasury estimated at the time that it would amount to £35 billion to £39 billion. Using assumptions consistent with our central economic and fiscal forecasts, we estimate the settlement would cost £37.1 billion, with around 75% falling due within our five-year forecast period.

Worryingly for British Prime Minister Theresa May, if the transition period (currently expected to be two years) is extended there could be further contributions sought by the EU. 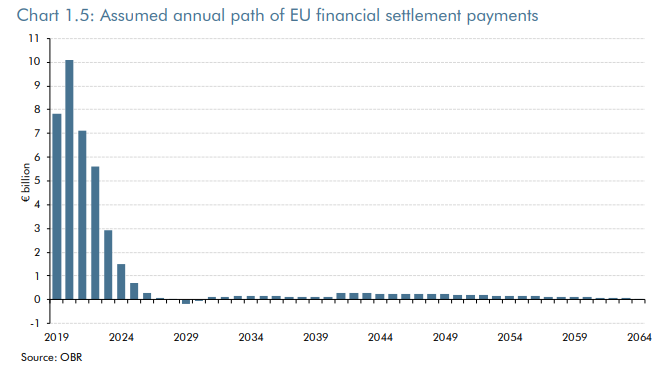 The OBR’s report comes alongside UK Chancellor Philip Hammond’s spring statement in which he upgraded the UK’s growth projections and predicted falling inflation and borrowing. 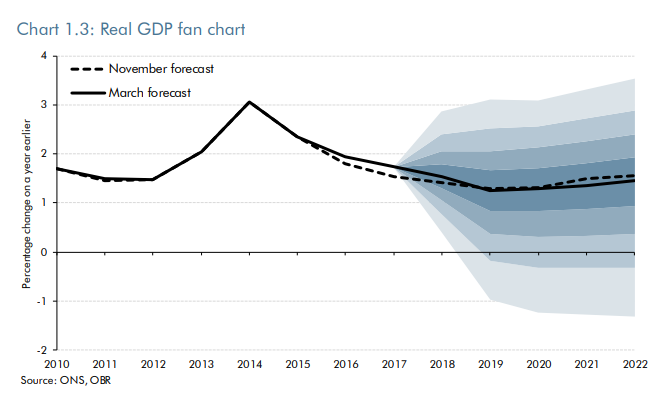 And also he launched consultations on several matters including: