European countries are facing tough times. Above all, political uncertainty is going to weigh down the overall performance of the UK’s key trading partners — and mean their savings take a hit.

Despite a strong 2016, replicating historic growth rates for wealth generation will be much harder going forward according to recent GlobalData analysis of retail savings and investments markets.

The UK is one of the top three export partners for the likes of Germany, Ireland, and Norway but with the UK’s future access to the single market in flux these economies face uncertain times.

And weak performance in the wider economy is reflected in weaker savings growth.

Meanwhile, Norway – despite maintaining higher growth than the rest of the continent – will be additionally impacted by low oil prices.

The country exports over 20 percent of its crude oil to the UK, making it its largest market.

After the UK exits the European single market, Norway will find it difficult to turn around its sluggish economic growth with potential customs to be paid on a sizeable portion of its exports. 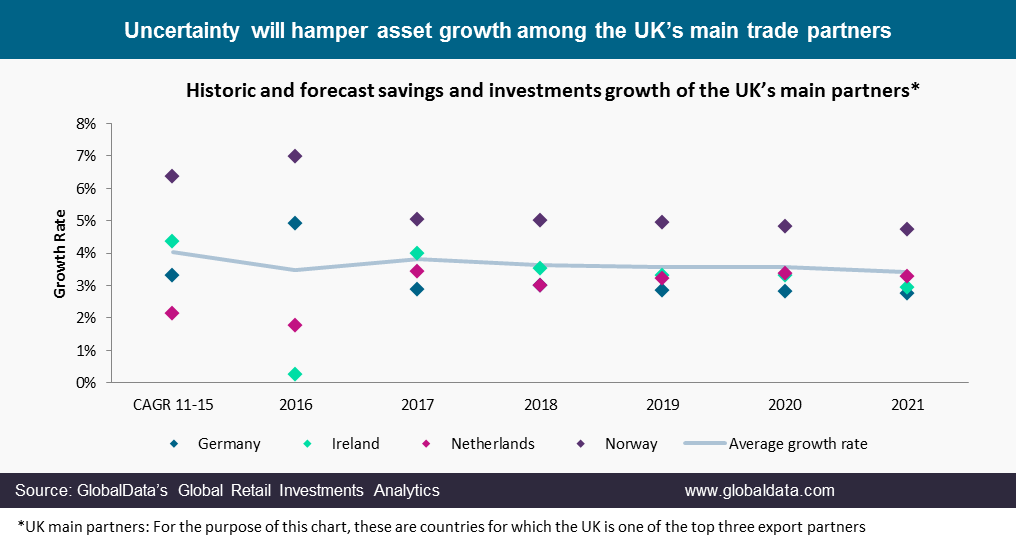 These trends could result in European officials reconsidering their stance towards a hard Brexit.

Germany’s views could further be influenced by developments in its other major trade partners, as trade growth in China has shifted and the expected economic boost in the US is yet to occur.

A softer Brexit would certainly be favoured by the wealth management industry.

Maintaining strong ties with the UK would be good for export-focused countries, and their populations’ savings growth.

But for now wealth managers have to face the reality and expectations of their clients – which will be delivering high returns to make up for slower new wealth generation.