The UK’s post-Brexit blue passports are going to be produced by a firm in mainland Europe, the British Home Office has this morning confirmed.

It was revealed in December last year that the UK would swap the European Union’s burgundy passport for the old blue version — hailed by Brexiteers as a symbol of Britain’s regained independence.

The UK-based maker of bank notes and formal, secure documents De La Rue last night revealed it had lost the contract to produce the new post-Brexit blue British passports from 2019.

Chief executive Martin Sutherland said the firm was being undercut by a French competitor after it had had worked with the UK government to produce passports for the last ten years. The contract is worth around $600 million over ten years.

Paris-based security company Gemalto is now expected to win a tender process. The new contract is set to begin in 2019, coincidentally the year Britain is scheduled to leave the EU.

Amsterdam-listed Gemalto is in the process of being acquired by Thales, the French defence group.

We do not require passports to be manufactured in the UK. A proportion of blank passport books are currently manufactured overseas, and there are no security or operational reasons why this would not continue.

Shares in De La Rue have fallen sharply this morning on the news after already suffering yesterday after the company said profits would be around the lower end of expectations and its chief financial officer would depart later this year. 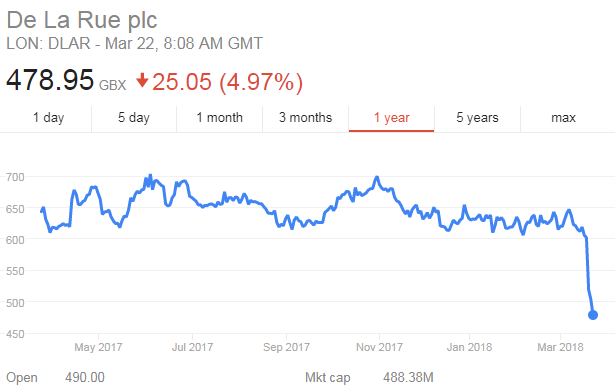 If these reports are true that the contract to manufacture the British passport will be awarded to a French company we would be hugely disappointed and deeply concerned that this shows a serious lack of commitment to British business from the UK government.

I think it is incongruous to say the least. It is completely unnecessary and it is symbolically completely wrong. Whatever the conditions which led to the decision in terms of pricing, the fact is that this is a symbolic event.