0 Reddit Email article LinkedIn 0 0
Robert Scammell
Rob is deputy editor at Verdict. You can reach him at robert.scammell@verdict.co.uk

Researchers have developed a way to ‘unprint’ paper to reduce the environmental impact of recycling paper, using technology that could one day be installed in a home printer.

The method, devised by engineers at Rutgers and Oregon State University, uses a xenon lamp to blast the printed paper with intense pulsed light, a technology often used in cosmetic practices such as hair removal.

An ethanol wipe is then placed over the sheet of paper, returning a blank, undamaged sheet of paper. The researchers say that it can erase black, blue, red and green toners.

Paper is a large contributor to fossil fuel emissions, chemical pollution and energy use. The researchers posit that reusing paper multiple times in the home or office would reduce emissions associated with recycling coated paper.

Existing methods for unprinting involve lasers that vaporise the toner without damaging the paper. However, the laser-based method cannot work with the standard coated paper found in home and office printers. 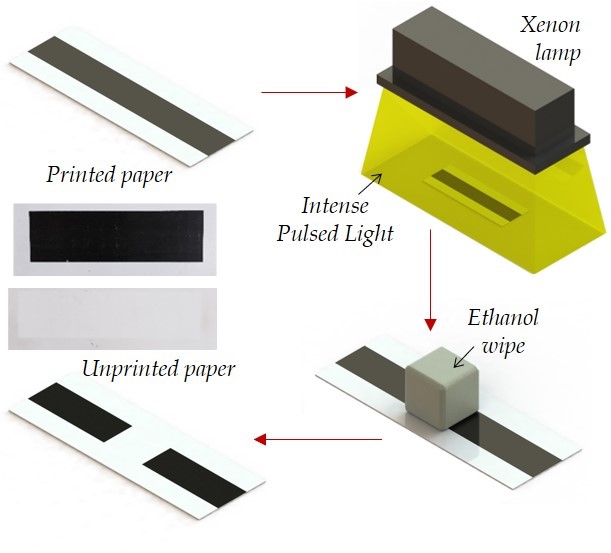 The unprinting method. (via Rajiv Malhotra)

“Our method makes it possible to unprint and then reprint on the same paper at least five times, which is typically as many times paper can be reused with conventional recycling,” said study co-author Rajiv Malhotra, an assistant professor in the Department of Mechanical and Aerospace Engineering in the School of Engineering at Rutgers University-New Brunswick.

“By eliminating the steps involved in conventional recycling, our unprinting method could reduce energy costs, pollution and greenhouse gas emissions.”

The researchers plan to improve the unprinting method so that it can be integrated into home printers, as well as testing it on a wider range of paper types.

The findings were published yesterday in the Journal of Cleaner Production.