At 152.4%, Uruguay recorded the second-highest mobile penetration rate in Latin America, at year-end 2018, only below Costa Rica and nearly 41 percentage points above the regional average.

This high level of service penetration contrast with the low level of competition in the communications market which is relatively concentrated with state-owned incumbent operator Antel accounting for 53% of the total mobile subscriptions in the market as of year-end 2018.

The state-owned operator has built a strong advantage in the market on the back of its extensive 3G and 4G/LTE networks and the development of an attractive portfolio of data value-added services, including video and music streaming apps. In April 2019, Antel announced it had activated its 5G network in the department of Maldonado, becoming the first operator in Latin America to launch 5G services. Although the service is not yet fully commercially available, the move signals Antel’s advantage in the mobile communications market.

Movistar, the mobile unit of Telefonica, ranks second, with an estimated 31% market share at year-end 2018, distantly followed by Claro, controlled by America Movil, with a 15.7% share of the market. 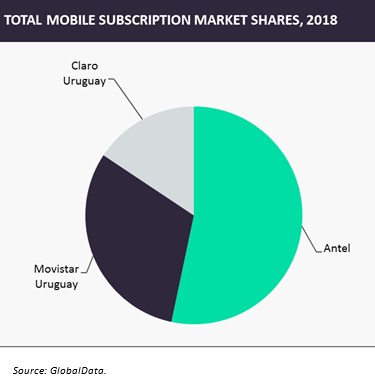