Comcast — the US cable operator and owner of NBC — has made a £22.1 billion ($30.9 billion) offer for the UK’s Sky, topping the existing one by Rupert Murdoch’s 21st Century Fox.

However, 21st Century Fox had already agreed a deal to buy the 61% of Sky it does not already own. 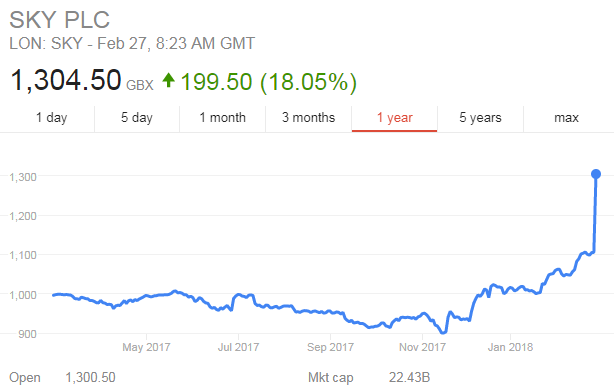 We think Sky is an outstanding company. It has 23 million customers, leading positions in the UK, Italy and Germany, and is a consistent innovator in its use of technology to deliver its customers a great experience. Sky has a proud record of investment in news and programming. It has great people and a very strong and capable management team.

We think that Sky would be very valuable to us as we look to expand our presence internationally. The cash proposal values each Sky share at £12.50 in cash — a significant premium to the 21st Century Fox price currently recommended.

We would like to own the whole of Sky and we will be looking to acquire over 50% of the Sky shares. We are confident that we will be able to receive the necessary regulatory approvals. If successful, the acquisition will enhance our free cash flow per share in the first year.

In a statement the company said:

Comcast attaches great importance to the skills and experience of the existing managers and employees of Sky. Comcast would approach integration of the broader management team in an open and transparent manner.

21st Century Fox’s bid for Sky was referred to the UK’s competition watchdog last year which found last month that Fox’s proposed bid to consolidate ownership of UK pay-TV giant Sky would give the Murdoch family too much influence in the British media.

But the regulator kept the door open to remedial actions that would still make a deal possible.

Since then Fox has agreed to ring-fence parts of the news business to meet regulators concerns and that it would maintain a Sky-branded news service in the UK for 10 years.

Comcast is the biggest US cable TV firm, and owns the Hollywood film studios Universal Pictures and DreamWorks Animation.

Owned by Comcast, NBCUniversal employees 1,300 people in the UK and the company claims to have invested $1 billion in film and TV productions in the UK over the past three years.

Murdoch’s news outlets are watched, read or heard by nearly a third of people in the UK, Reuters has reported, with a combined market share greater than all other news providers, except the BBC and commercial TV news provider ITN.

Iger was in Paris on a business trip and was meeting French President Emmanuel Macron.