GlobalData expects revenue to expand from $192 billion in 2019 to $224 billion in 2024, a 3% CAGR for the period. Growth will be mainly driven by the increasing adoption of smartphones, which we project a penetration of 97% over total population by year-end 2024, and data average revenue per user (ARPU) growth supported by increased data traffic.

Growth in US smartphone data use spells: Kerching!

The US mobile market has been experiencing a rapid acceleration in data consumption due to the increasing demand for video and multimedia as well as operators’ commercial emphasis on the promotion of unlimited data plans.

In this sense, average smartphone monthly data usage in the US will grow from12GB in 2019 to 37GB/month by 2024. The recent launch of commercial 5G services (eMBB) will help to accelerate this data usage as operators expand their network coverage and 5G-enabled smartphones become more commercially available.

We project that by 2024, 38% of the total mobile subscriptions in the US will be supported by 5G technology, most of which will be on unlimited smartphone plans. Looking ahead, we expect carriers will continue to develop their 5G ecosystem by collaborating with other IoT solutions providers in order to offer solutions such as remote drones, autonomous car, 4K live streaming, and live immersive experiences, that will further support ARPU growth. 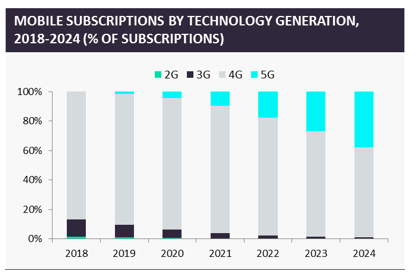