Amidst a Covid-19-related slowdown, 2020 capital spending among US network operators was down slightly from 2019; however, based on early guidance, 2021 capex looks to be up modestly.

An analysis of US operator financial results based on Q4 2020 earnings releases shows that while Covid-19 did slow capital investment, it could have been worse. Thanks to a flurry of activity toward the end of the year, the nine publicly-reported carriers, all of which spent in excess of $1 billion in capex, accounted for just over $67 billion in spending. That was down by approximately $3 billion, or 4.2%, compared to 2019.

GlobalData estimates that the big three that account for nearly 70% of total capex – AT&T, Verizon, and T-Mobile USA – spent roughly $46 billion, down 6.1% from 2019. However, the bulk of the decline was attributable to AT&T.

Factoring in 2021 guidance provided alongside year-end 2020 results, GlobalData estimates that next year’s spend among these US operators will be up by approximately 3.5%. That would return full-year investment to $69.4 billion, just below the $70.1 billion these operators spent on capex in pre-pandemic 2019. 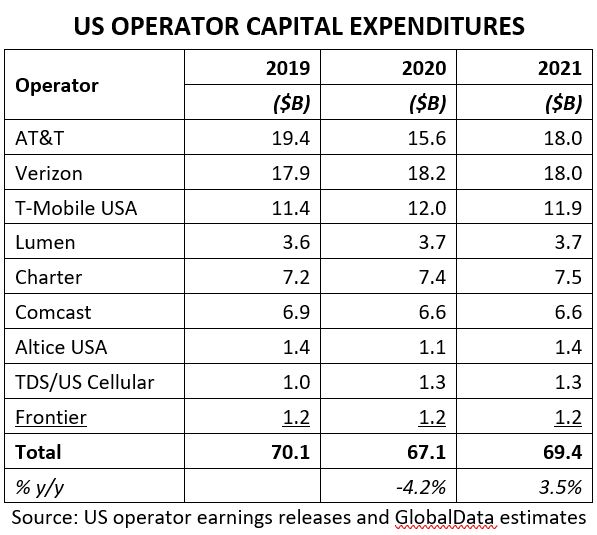 A scan of international operator results shows a similar trend of modest decline in 2020 along with the expectation of a modest increase in spending to keep ahead of demand and continue to invest in 5G-related priorities. For example:

To network infrastructure vendors, year-end results show relatively good news on two fronts: the major and long-term slowdown from operators in the wake of Covid-19 was less severe and more short-lived than expected, and much of the slowdown now appears to be more related to deferrals (into 2021) rather than cancellation of plans.