A GlobalData analysis of US telcom operator financial results based on mid-year 2021 earnings releases shows capital expenditures (CapEx) spending increased just over 7% compared to Covid-impacted H1 2020. In total, the nine publicly reported carriers spent $38.5 billion in CapEx. GlobalData estimates that the big three operators that account for nearly 70% of total US CapEx – AT&T, Verizon, and T-Mobile USA – spent just over $26 billion, up 6.1% from H1 2020.

T-Mobile was the standout among H1 2021 CapEx spenders, increasing its spend by approximately $2.5 billion compared to the prior year as it works through the buildout of its 5G network across both low-band spectrum as well as the mid-band 2.5 GHz spectrum it obtained through its acquisition of Sprint.

T-Mobile was one of a handful of operators increasing its guidance for full-year 2021. T-Mobile USA now expects to spend $12.0 billion-$12.3 billion on a full-year basis, up $300 million from previous guidance. Similarly, Frontier increased its full-year guidance by $300 million to $1.8 billion due to its plans to accelerate its buildout of fiber in 2021-2022.

Overall, most operators maintained previous guidance, while one operator, Lumen, decreased its guidance by $300 million to $3.2 billion-$3.5 billion. 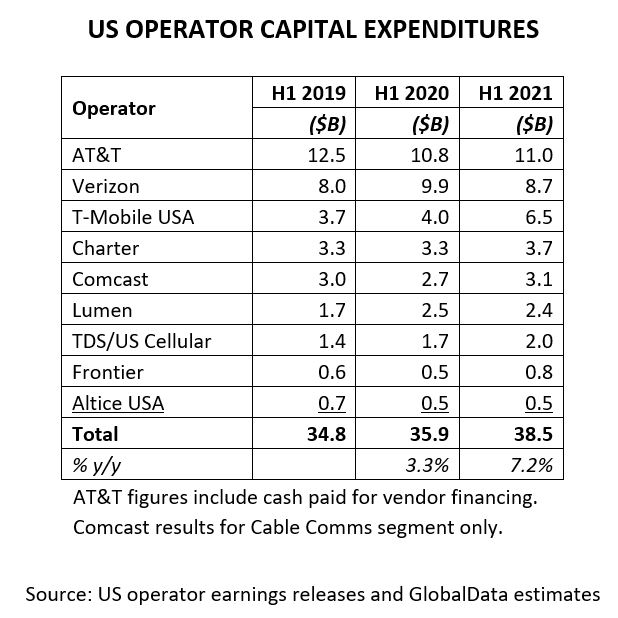 Overall, US operators appear poised to post a 3%-4% increase in full-year CapEx compared to 2020 – on par with GlobalData estimates originally published in March 2021.

However, one operator in particular, AT&T, introduced a possible fly in the ointment. Speaking at an investor conference in August, AT&T CFO Pascal Desroches indicated that his company will likely reach only 2.5 million new homes with fiber this year compared to its previous guidance of 3 million, due to fiber supply chain issues.