UK telecoms operator Vodafone warned in September that the UK government has much more to do to meet aggressive emissions reduction targets that call for a 78% reduction in carbon emissions by 2035 and net zero emissions by 2020. The company believes its Internet of Things (IoT) solutions can help.

In a new report issued in conjunction with political communications consultancy WPI Economics, Vodafone pointed to slow progress in important sectors including agriculture, manufacturing, and transport where IoT could potentially deliver important progress.

In these three sectors alone, Vodafone estimates that existing IoT technology has the ability to reduce between 11.7 million and 17.4 million metric tons in annual greenhouse gas emissions – at the high-end, that would represent 4% of total UK emissions, or approximately the total emissions in the North East of England). The benefits of IoT vary by population density – Vodafone estimates that in city centers, 87% of the benefit would come from smart transportation solutions; by contrast, agriculture would drive 38% of emission reductions in rural areas. 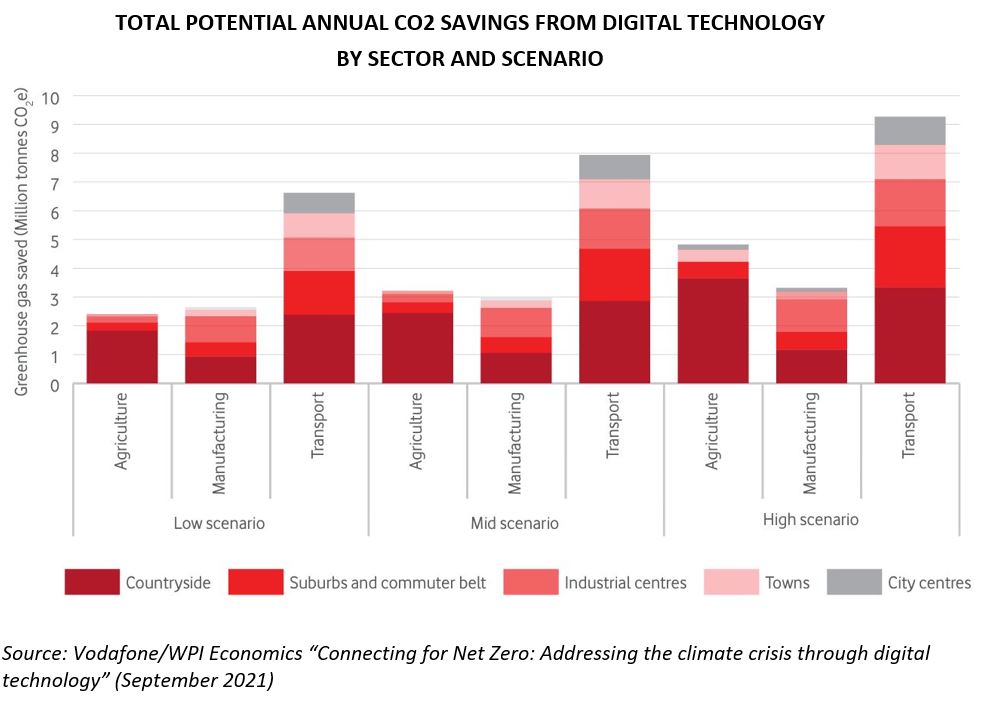 In order to fully realize these emissions reductions, Vodafone issued a call to action for the UK government. Among its recommendations:

For all the focus on the lead-up to COP26, the next annual UN climate change conference happening in Glasgow, Scotland in November, Vodafone also offers another, less altruistic rationale for focusing on 5G-based digital solutions to reduce carbon emissions: jobs. According to the September report, Vodafone estimates  that  5G  could  add  £6.3  billion  to the value of UK manufacturing by 2030 and create 175,000 additional jobs across the economy.