Walmart is still winning the battle for US retail domination despite increased competition from the likes of Amazon.

However, Walmart’s retail reign may not last much longer, as ecommerce continues to disrupt the industry, with Amazon’s share of the overall market growing by the year.

In 2018, Walmart still trumps Amazon in both sales and profits, despite Amazon’s explosive year-on-year growth.

But Walmart is still the biggest name in US retail, accruing $18 billion in net income for 2017, compared to $3 billion made by Amazon.

Over the next few years, Amazon is poised to grow even further, according to bankers at JP Morgan.

Analysts say that Amazon’s US gross merchandise volume (GMV) — a key industry metric for ecommerce that measures the total dollar value of merchandise sold online — is set to match Walmart’s US net sales by 2020 or 2021.

The sheer size of the online retailer, its record-breaking delivery times, the launch of new features such as Prime video, and discounts for grocery shoppers for members all contribute to Amazon’s burgeoning success, analyst Christopher Horvers wrote on Monday.

Amazon is the second-largest US retailer and fastest growing at scale.

Prime delivers such massive scale and features that we believe it would be very difficult for any company to replicate.

The company offers same-day free shipping on more than a million items for Prime members when ordered before noon in 8,000 cities and towns. Prime Now goes a step further and guarantees two-hour delivery on tens of thousands of items in 32 US cities.

With ecommerce set to be worth $523 billion by 2020 from $395 billion in 2016, and forecast to dominate 25% of US retail sales in the next decade, consultants at FTI suggest that the real winners will be those who conquer zero-sum online retail.

And this looks set to be Amazon, FTI predicts, as the retailer increases its momentum to gain a growing slice of the market.

This represents nearly 12% of relevant US retail sales versus 4% currently. 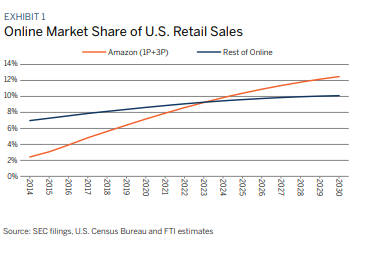 The share of Amazon of the online retail market also grew at a pace of 10% in 2016 according to Internet Retailer, capturing 43% of all US web-based purchases in 2016, up from 33% the previous year.

In a bid to catch up, Walmart announced a $16 billion investment in Flipkart this month for a 77% share of India’s largest online retailer.

The corporation also says it plans to target online sales growth of 40% in fiscal 2019 as it prepares to roll-out a new website with unique brand partners.

The value of Walmart’s sprawling brick-and-mortar empire, that can act as depots for its flourishing ecommerce business, should also not be underestimated.

While having a large fleet of stores is often seen as a weakness in the digital age, Walmart’s extensive network is actually a major asset. Most of its stores trade profitably as stand-alone entities.

However, they are also distribution points that can be used as places to collect or dispatch online orders.

Given Walmart’s reach across the US, including to rural areas, it has a major advantage over Amazon in being able to fulfil more profitably to more households.

Admittedly, Walmart has some work to do in putting systems and processes in place, but once it does it will be a force to be reckoned with.

Asked whether Walmart should be closing or opening its physical shops, Saunders added:

Future store openings are a possibility in select areas, but activity will be limited as Walmart already has comprehensive coverage.

In urban areas, we may see Walmart do something with collection points – but given its inability to get to grips with a smaller store format in the past, major activity here seems unlikely.

Amazon’s brick-and-mortar presence pales in comparison, despite buying Whole Foods in August for $13.7 billion and adding 467 Whole Foods units to its fleet of Amazon Go stores opening around the country.