Popular messaging service WhatsApp is raising its minimum user age from 13 to 16 in Europe to help it comply with new wide-reaching rules coming into force next month called the EU General Data Protection Regulation (GDPR).

To satisfy regulations, WhatsApp — which is owned by US social media giant Facebook — will ask European users to confirm they are at least 16 years old when they are prompted to agree to new terms of service and a privacy policy in the coming weeks.

Founded in 2009 and bought by Facebook in 2014 for a cool $19 billion, WhatsApp has come under pressure in recent months around the world for its use of end-to-end encryption and its plans to share more data with Facebook — even as Facebook is embroiled in a data sharing scandal of its own.

WhatsApp’s minimum age of use will remain 13 years in the rest of the world, in line with Facebook’s.

To comply with GDPR Facebook will however ask those aged 13 to 15 to nominate a parent or guardian to give permission for them to share information on the platform.

Other changes announced by WhatsApp last night include allowing users to download a report detailing the data it holds on them, such as the make and model of the device they used, their contacts and groups and any blocked numbers.

Facebook’s share price has somewhat recovered since its massive sell earlier this year but remains well under its February highs. 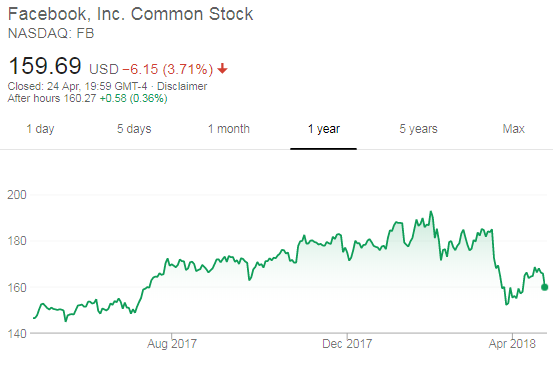 Read more: What we learnt from Aleksandr Kogan’s testimony on the Cambridge Analytic Facebook scandal

We are not asking for new rights to collect personal information with this update. Our goal is simply to explain how we use and protect the limited information we have about you.

WhatsApp cares deeply about your privacy and security. Every message and call is secured by end-to-end encryption so that no one, not even WhatsApp, can read or listen to your conversations. In the coming weeks, you will be able to download and see the limited data that we collect. This feature will be rolling out to all users around the world on the newest version of the app.

WhatsApp, which had more than 1.5 billion users in January, did not make clear how it will verify answers from users.

European regulators have previously blocked an attempt by WhatsApp to share users’ phone numbers and other information with Facebook to help it better target ads.

The European General Data Protection Regulation (GDPR) — which will come into effect next month — is the biggest overhaul of online privacy since the creation of the internet, giving EU residents the right to know what data is stored on them and the right to have it deleted.

It will affect both companies that use people’s data to directly make money, as well as any company that stores data about its users.

Banks, tech companies, and media companies are all under pressure to meet GDPR regulations ahead of the deadline.