Today is World Food Day. However, it isn’t about stuffing your face and filling your belly. It’s about promoting awareness for those that frequently go without.

World Food Day was established by the United Nations’ Food and Agriculture Organization back in 1979. 16 October was selected as the day to coincide with the anniversary of the organisation’s founding.

Each year sees a new theme selected in order to raise awareness for a particular agricultural issue that needs it. Past themes have included food security, small farmers and food prices. This year’s theme is “change the future of migration”, as the UN encourages governments to ensure that everyone has access to food, no matter what their situation.

However, aside from the annual theme, World Food Day has had a new focus in recent years.

In 2015, United Nations set 17 goals that the organisation hoped to achieve by 2030. In total, These include ending poverty, removing inequality and ensuring peace between nations.

The UN hopes to eradicate hunger within the next 13 years, but how close are they to achieving that goal?

According to data compiled using the Food and Agriculture Organization’s chronic hunger index, undernourishment has been dropping for some time.

Between 2005 and 2015, world hunger fell by 3.9 percent, meaning that 10.8 percent of the population weren’t getting the calories that they needed to sustain good health, down from 14.7 percent. 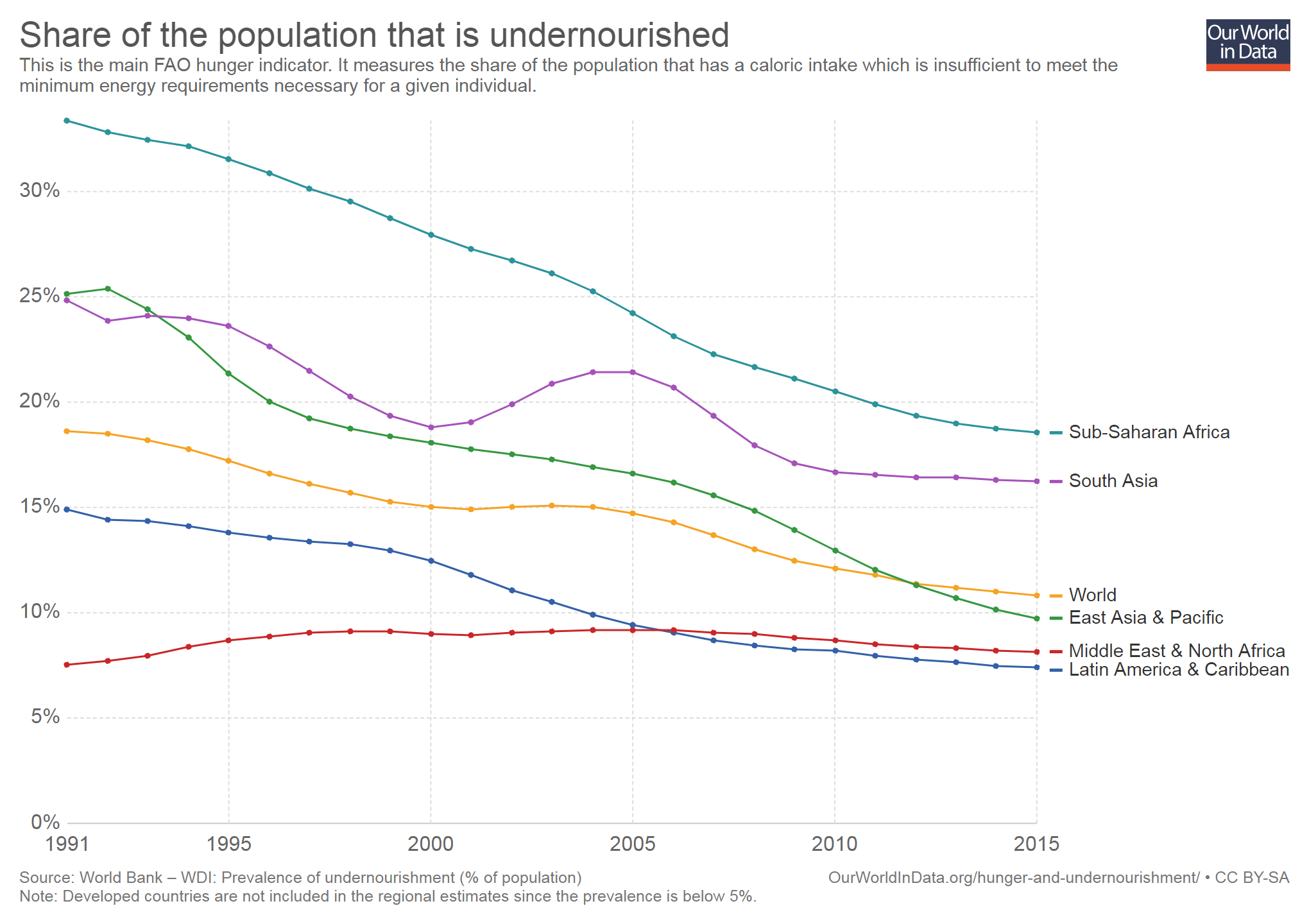 If development continues at that speed, hunger would be eradicated by 2069.

However, in order to end hunger by 2030, UN would have to improve the situation of 0.85 percent of the world population (more than 60 million people) each year.

Yet, the world has moved backwards in recent years. Since the Sustainable Development Goals were started, United Nations has seen world hunger rise.

In 2016, world hunger climbed by 0.2 percent after 10 years of decline, with 11 percent of the population suffering from undernourishment. 2017 saw another rise, with an additional 38m people becoming chronically undernourished.

This is largely due to recent conflicts. According to the Food and Agriculture Organisation’s senior economist Cindy Holleman, 60 percent of those suffering with hunger are located in conflict-hit countries.

“Whether it has been a blip and it’s going to go back down again, we’re not sure, but we’re sending warning signals,” Holleman said. “If you look at the 815m [chronically undernourished] people, 489m or 60 percent of them are located in countries affected by conflict.”

Until the situation changes, the #ZeroHunger goal seems like an unachievable target, especially by 2030.

Topics in this article: United Nations