World Press Freedom day — created to celebrate the achievements of the free press — is an opportunity to reflect on the economic benefits of a free media.

A free press bridges the information gap between people and government, holding governments accountable and promoting justice and democracy.

Verdict has compared the GDP per capita of 191 countries around the world to their World Press Freedom Index ranking in 2018 — compiled by Reporters Sans Frontieres (RSF) — to see whether a free press and economic prosperity go hand-in-hand.

The five countries with the highest GDP per capita in the world all ranked in the top 20 for their open press.

Norway ranked number one on the press freedom index, and came fifth for GDP per capita.

The small country of Luxembourg, which enjoys the highest GDP per capita of any country in the world at $105,803 per head, comes 17th in terms of press freedom.

Almost all of the top ten highest GDP per capita states ranked in the top 20 for a free press.

The exceptions were oil-rich Qatar and the city state of Singapore, with some of the most draconian press laws in the world, despite their large economies.

One of the six Gulf monarchies, Qatar ranks 125th on the press freedom index, while Singapore trails in at 151st.

The Middle East’s countries are yet again at the bottom of RSF’s World Press Freedom Index. Armed conflicts, terrorism charges against independent journalists and media, and growing online surveillance and censorship make reporting extremely dangerous for the region’s journalists.

In relation to Singapore RSF said:

The Chinese model of state-controlled news and information is being copied in other Asian countries, especially Vietnam and Cambodia. North Asia’s democracies are struggling to establish themselves as alternative models.

Violence against journalists is increasingly worrying in Afghanistan, India, Pakistan and the Philippines.

The World Press Freedom Index measures 180 countries according to the level of freedom available to journalists based on evaluations of pluralism, independent media, media law and safety of journalists in each country. The GDP per capita data used is courtesy of the International Monetary Fund.

None of the 15 former Soviet states were among the top 40 fastest growing economies of the last year, while 67% of countries that were part of the Soviet bloc fell into the bottom 100 countries for lowest GDP per capital, out of 191 states.

Around two-thirds of former Soviet countries ranked near or below 150 on the press freedom index.

The two countries with the some of the lowest GDP in the bloc were Uzbekistan and authoritarian Tajikistan who ranked 165 and 149 for their respective press freedoms.

The Soviet region’s overall indicator has sunk almost as low as that of Middle East/North Africa, the region that is last in the ranking by region.

Bucking the trend, Turkey boasted a 7.4% GDP growth rate in 2017 while in the same year leading global declines in press freedom.

Media crackdowns by Turkish President Tayyip Erdogan caused the country to fall two places as the number of jailed journalists hit a historic high for the second year running.

Peter Leeson, who has researched the patterns of media freedom and economic development for decades, thinks that if governments own or control the media, it can damage economic growth.

We find that outlet ownership is important, but not the only or most significant determinant of media manipulation.

Additionally, we find that media manipulation has a deleterious effect on information credibility that destroys the possibility for economic reform and improved economic performance.

Although an independent media is not sufficient to create prosperity, our analysis, which supports the work of others, suggests that it is necessary. 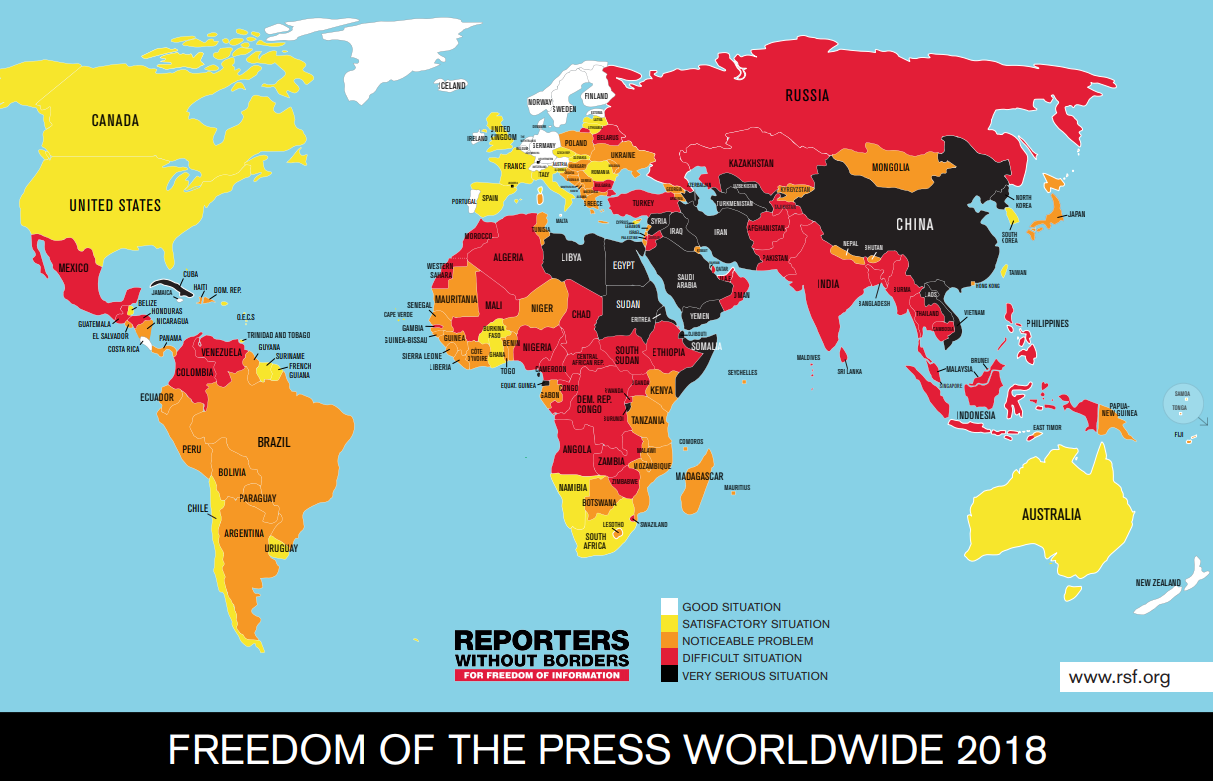 The 2018 World Press Freedom Index warned of growing animosity towards the mainstream media around the world and this trend of hostility extended to countries traditionally committed to a free press.

Under President Donald Trump the US has fallen in the freedom charts. Trump has branded journalists as “enemies of the people” and accused them of spreading “fake news”.

The US, the country of the first amendment, has fallen again in the Index under Donald Trump, this time two places to 45th.

Yet amidst Trump’s sustained attacks on the media on Twitter and elsewhere, the US economy is flourishing. US employment is falling, sinking to 4.1% in December, which is close to one of its lowest recorded level of 3.9% in 2001.

At the same time the US economy is growing, and the stock market is having a record run.

The US economy grew at a 2.9% annual rate in the fourth quarter of 2017, according to the latest US Commerce Department figures.