Change is afoot in the luxury industry. An ethical conscience is permeating and the demand for vegan products has never been higher.

Gucci, one of the biggest fashion houses in the world, announced earlier this month that it will be fur-free by 2018, and the global synthetic leather market is growing rapidly. It is set to increase by 50% by 2021.

Gone are the days of fur and leather being markers of luxury. This ethical conscience is filtering through from our food to everything from our clothing to our beauty products. Food label-style ingredients lists are being used to show consumers what exactly they are putting onto, as well as into, their bodies.

As veganism permeates the luxury market, and as World Vegan Day approaches, we have been looking into the best buys you need that are both stylish and ethical.

British designer Charlotte Beecham, of brand Charlotte Simone, has been experimenting with faux fur styles since 2011. After launching the brand as accessories only — think fluffy scarves in bright colours that were spotted on everyone from Alexa Chung and Sienna Miller to Kendall Jenner — Beecham has since added outerwear.

This coat was her first move into clothing and is now a firm staple each season. We love the grey version, but the pastel shades have also been a huge hit. 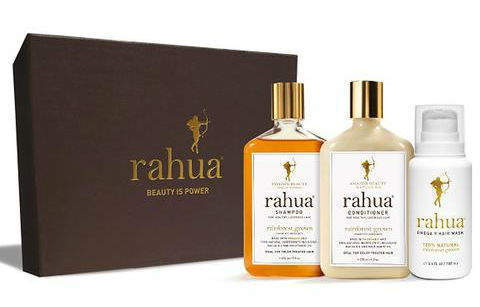 Luxury haircare brand Rahua creates plant-derived, vegan products which are all free from chemical fillers, silicons and even gluten.

The products all feature rahua oil — an organic ingredient from the Amazon rainforest which was used and discovered by the Quechua-Shuar tribe. With all-natural and organic ingredients, the haircare range helps to smooth and repair the hair. A hero product is Rahua’s Omega 9 Hair Mask which adds shine to dry and damaged hair — and the signature lavender scent is addictive!

Stella McCartney has long championed vegetarian fashion — think realistic-looking artificial leather handbags and fluffy wool coats — but she is now moving one step further into vegan fashion. This involves not using any animal fibres at all – from leather to wool to silk.

Partnering with bio tech company Bolt Threads, which specialises in advancing sustainable materials, McCartney has created a vegan silk made from yeast.

This silk, which McCartney has crafted a one-of-a-kind dress out of, forms part of the Museum of a Modern Art’s design exhibition. Named “Items: Is Fashion Modern?”, the exhibition is open now until January 28.

McCartney will be featuring this protein-based yarn, which was inspired by spider silk, in her upcoming collections. She has also been working on a yarn spun from Parley Ocean Plastic — plastic from bottles that charity Parley for the Oceans collects from the sea — and she debuted this in her recent collection for Adidas.

Speaking to WWD, McCartney said that developing this ethical silk has been a game-changing discovery for her as a designer –

“Now is the time to search for answers, for alternatives. For me, I’ve always struggled with the use of silk. Finding Bolt has been a life-changing and career-changing moment for me.”

Many champagne brands aren’t vegan because they use animal products, such as egg whites, in their production processes. As this is only for production, these traces aren’t typically included in ingredients lists.

After spending 20 years perfecting a new version of the production process, the French champagne house became the first ever 100% vegan champagne brand in the world. We spoke to Julien Duval-Leroy to find out why the move to vegan champagne and how it is made –

“There is a huge consumer demand for wines which are made as naturally as possible. So putting time into the ageing process is an investment that is worth it for us. We leave our wines for three months extra to allow for a more natural settling process. This then means that we don’t need to add in any animal agents such as gelatine, milk protein or egg whites.”

Want to read more on World Vegan Day? Then check out our article on why vegan fast food is becoming big business.