Once a leader in the US prepaid market, ZTE is disappearing from prepaid operator shelves thanks to its troubles with the US government.

In 2017, the Chinese multinational  ZTE admitted to breaking US export laws by selling US-based technology to North Korea and Iran between 2010 and 2016.

Subsequently, ZTE was punished with a $1.19 billion fine and a seven-year block on buying any US technology to make its smartphones.

The block on buying US technology was put on hold to enable ZTE to make operational changes, but it failed to comply and was forced to shut down operations for three months because it didn’t have access to key technology.

After paying another $1 billion in fines, changing its board of directors and installing a U.S. compliance officer, ZTE was allowed buy U.S. technology again.

But the damage has already been done. US carriers are the gatekeepers to smartphone sales, and they are risk averse in a heavily regulated market.

ZTE US trouble: operators keen to not get caught-up

According to GlobalData’s research, the number of ZTE smartphones on prepaid operator shelves fell 48% from June 2018 to September 2018.  The sudden drop in the number of ZTE devices is an indication of wariness on part of US carriers to engage with ZTE due to political pressure.

ZTE now has just 21 phone models in prepaid – half the number it had three months ago.

Phones disappear from shelves all the time; but the key here is the large number of dropped phones in a single quarter, and ZTE has not replaced them with new devices.

StraightTalk dropped four out of 13 ZTE phones; Total Wireless dropped six out of its seven ZTE phones; and Tracfone dropped all four of its ZTE devices in Q3 2018, a majority of them were sub-$150 smartphones.

GlobalData’s numbers show that nearly every US prepaid carrier offers ZTE phones, with ZTE making up as much as 14% of some prepaid operators (see chart below). The percentage is even higher below the $150 price point. 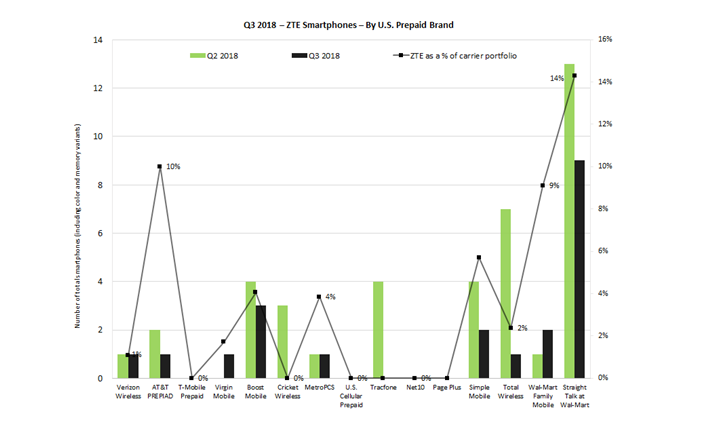 ZTE’s uncertainty in the US will continue

The road ahead for ZTE will be difficult and it is unclear if US operators will feel free to engage deeply with vendor in the future.

The US is the largest market for ZTE’s smartphones, so ZTE can’t afford to exit the market completely. Even if ZTE manages to avoid further regulatory problems, we expect political pressure to continue.

ZTE also needs to distance its device business from ZTE infrastructure and separately maintain US consumer data in the US.

ZTE could consider re-branding its devices group to something without “ZTE” in it and use its premium Axon sub-brand to reinvent itself across regions.