According to plans for the “digital economy of the Russian Federation”, the government aims to have reliable 5G communication in all the major cities of Russia by 2024.

In line with this plan, five major Russian telecom operators are planning on launching 5G commercially in 2020.

One telco, MTS, has signed an agreement with China-based Huawei Technologies to carry out 5G network trials over 2019-2020. It is also working with Swedish vendor Ericsson to test smart city solutions over 5G/IoT networks in the Republic of Tatarstan.

The second telco, Beeline, received frequencies in the 25.25GHz-27.5GHz bands to carry out 5G trials in Moscow, St. Petersburg, Novosibirsk, Tatarstan Republic and Krasnodar. It is also working with the Moscow authorities on the deployment of 5G network, NB-IoT, Smart City and virtual/augmented reality (VR/AR) solutions. To further develop and implement 5G & IoT services, Beeline has partnered with Skolkovo Foundation to establish a competence centre to facilitate technology integration in Beeline’s business.

The third and fourth telcos, Megafon and Rostelecom, established a 50:50 joint venture for 5G development. Megafon plans to pool its 5G-suitable spectrum including 24MHz in a 3.4GHz-3.6GHz band in Moscow, gained through the acquisition of Neosprint in April 2018. In the meantime, Rostelecom is working with a state corporation, Rostec, to develop a 5G roadmap. Rostelecom’s responsibilities include the development of a section of the roadmap concerning the deployment of 5G infrastructure using domestic technologies and stimulating market demand for 5G.

Following the agreement to deploy 5G in Russia signed at Mobile World Congress, the fifth telco Tele2, in partnership with Ericsson, has launched an experimental 5G zone in Tverskaya Street in central Moscow. The 5G is deployed in 28GHz band. As a part of an agreement, over 50,000 base stations will be deployed across the country over the next five years.

In the chart below, GlobaData illustrates the evolution of 5G penetration in Russia for the years 2019 and 2024: 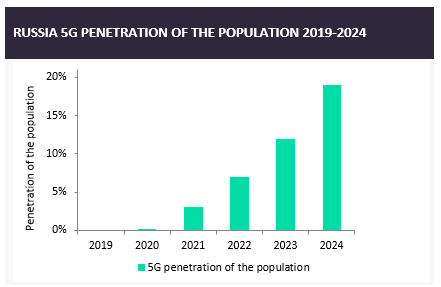